A mum has told how she fears her vulnerable teenage daughter has been lured away from home by a self-styled gangster on Facebook. 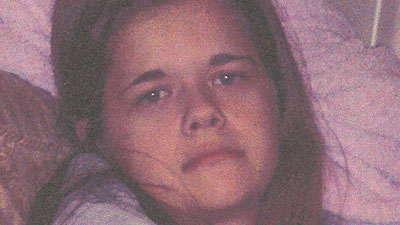 Demi has a heart condition which needs daily medication


Demi Wright, 15, has been missing since Tuesday after she left her home to meet a man called Sefa, who has boasted on social networking sites about nearly getting shot.

The schoolgirl also has a heart condition and needs medication every day, her mum Johanna Shaw revealed.

She told how her daughter has been exchanging messages with Sefa - some of them sexually explicit.

Demi was last seen leaving her North London school and her Oyster public transport card shows she headed for Brixton in south London.

Johanna revealed Demi was "obsessed" with messaging the man.

"There was some serious sexual stuff which surprised me because Demi's quite immature. She played along with things he was saying."

On MSN messenger, Sefa tells her he "nearly got shot" out with his gang in the South London suburb.

Johanna said: "It's a nightmare. This is completely out of character."

"Demi is so trusting, naive and immature and she's been lured away by someone on the internet.

"I'd have sworn she'd never have done this."

Mum-of-three Johanna, from Southgate, North London, added: "Before social networking sites this never would've happened - she'd have stayed with people she knew and could trust."

A police spokesman said: "Officers are investigating the possibility Demi's met up with someone she met on the internet.

"Demi has made no contact with family or friends and her phone has been switched off since shortly after her disappearance."

Published: 27 Mar 2010
Add a comment Add a comment (5)
A GIRL who went missing for three days after meeting a man on Facebook last night told her mum: "I'm safe."

Demi Wright, 15, will be reunited with Johanna Shaw, 40, after a bus driver spotted her in Wandsworth, South West London, and told cops.

The teen left home on Tuesday without medication for her heart condition after exchanging messages on the site with a "gangster" called Sefa.

Johanna, of Southgate, North London, said: "I want to cuddle her."
#