Haringey Council's failing child protection procedures were reported to the Government six months before the death of Baby P, it has emerged.

Lawyers for a whistleblower wrote to four ministers about the council's social services department.

The letter warned that child protection procedures were not being acted upon following the murder of Victoria Climbie in 2000.

The letter, written in February last year, claimed child abusers were "not being tackled", "sexual abuse had been ongoing for months and the new management brought in post-Climbie had not acted".

Officials responded at the time by saying that ministers were not in the position to deal with the allegations.

They suggested that the claims should be referred to the social care inspectorate - a response the Government said today was correct.

"The permanent secretary of the DCSF has looked at the reply and is confident that the proper procedures were followed," said a spokeswoman for the Department for Children, Schools and Families (DCSF).

The allegations against the council were made by whistleblower Nevres Kemal.

An injunction now prevents her from speaking publicly about the claims.

The revelation came after Haringey apologised yesterday for not doing more to protect 17-month-old Baby P.

Social workers failed to raise the alarm despite 60 visits from the authorities during eight months in which he suffered more than 50 injuries.

The 32-year-old boyfriend of Baby P's mother and another man, Jason Owen, 36, were convicted at the Old Bailey on Tuesday of causing or allowing his death.

The child's 27-year-old mother had already pleaded guilty to the same charge, which carries a maximum 14-year jail term.

All three have been remanded in custody and will be sentenced on December 15.

Baby P's mother and her boyfriend cannot be identified for legal reasons.

The investigation, which started yesterday and is due to make an initial report by December 1, is being carried out by Ofsted, the Commission for Healthcare Audit and Inspection and the Chief Inspector of Constabulary.

Baby P is not alone by any means.
Rest in Peace Amy and baby P x

Published: 09 Oct 2008
TRAGIC tot Amy Howson was battered to death and had her spine SNAPPED in two by her brutal dad – after being starved, a court heard today.

Amy had more than 40 injuries, including seven other fractures, over her shattered body – some of them eight weeks old. 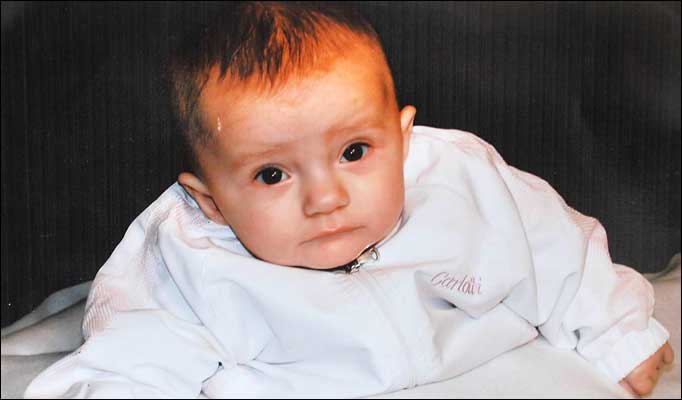 e
weighed the same as she did at the age of SIX MONTHS.

This link will tell you the whole story....WARNING....it is horrific.

This link will tell you the whole story....WARNING....it is horrific.

It is truly horrific, Antoinette, what that little girl was subjected to. I have a tendency to refer to people like Amy's dad as 'animals,' but animals don't tend to treat their offspring with such cruelty. So, no, he's not an animal, he's an ignorant swamp-dweller of an evil human being.

If you think these stories are bad, go read about a 2 yr old, Tiffany Wright, who was starved to death in her room in a pub whilst her mother and stepfather were downstairs.

She used to wave to people who walked past her window...little did they know that she was never fed, they looked after the dogs better than her...she was nicknamed .'the porcelain doll' by the way she looked and the colour off her skin....she never saw daylight.


When the mother finally went to her b/room, she had been dead 2-3 days!!!

For DCI Powell, the symbol of how badly Tiffany was failed were the lilac flakes he had found in her bedroom, evidence he finally came to understand. Without toys or food, the three-year-old had resorted to licking or eating the paper from her wall, spending hours diligently picking it off in pieces, an entire arc cleared by her bed-head as she foraged; tiny scraps had been found stuck to her locked fists. And all the while she would have heard the drinkers down below, stamping and singing. People who now quietly admitted to each other, as they shuffled past the boarded-up pub, that they had long suspected things were going horribly wrong in the flat, recalling Sabrina's failings and Rob's absence, the couple's incendiary arguments, their dirty, emaciated children, and how all of them had continued to drink the Hirsts' beer and not said a word

The next few days were a blank until ­police recovered CCTV footage from the pub and found a microphone had picked up Sabrina and Rob's most ­private conversations. On 27 September 2007, the day Sabrina had told police she had last fed her daughter, the CCTV ­recorded her cleaning the bar while saying to no one in particular, "I have to get my daughter up. I've not seen her for a week." The next day, she was seen leaving the pub alone to go shopping at Tesco for an hour. There was also no sign of the children when Sabrina and Rob left the pub to visit friends for two hours on Saturday morning, or that afternoon when they went shopping and came back an hour later with bags of dog food. Later, Sabrina was taped talking about buying vitamin supplements for her staffie, which had been losing weight.