Just another poor child whose fate is unknown,I can't do links cos I am using iPad,so if someone could do it instead.thanksXx

Mother pleads for help finding her baby, missing for TWO WEEKS as his father didn't report it to police

Levon, 9 months old, was last seen by his father Jevon Wameling in May
Jevon had custody while Levon's mother Amy Warney was in drug rehab
Jevon waited two weeks to tell someone his son was missing
Six agencies have been searching for signs of Levon for three days


A mother pleaded for help finding her 9-month-old baby who has been missing over two weeks as his father failed to report him missing.
Amy Warney called for the public's assistance in locating her son Levon Wameling, who was last seen May 29 by his father in Utica, N.Y. Though police say Levon's father is still not being treated as a suspect, Jevon Wameling, 27, waited nearly two weeks to report his son missing, according to the The Utica Observer-Dispatch.
'I would like to ask anybody that's out there if you know where he is, or if he's alive or dead, just please call the Utica police Station so I can just put him to rest,' Warney said through tears at a news conference Thursday. 'Just please, don't be scared. Just if you know anything, just please contact somebody.'

Levon's grandparents reported him missing Tuesday to the Oneida County District Attorney Scott McNamara, who immediately notified police, according to WKTV. After his son was reported missing, Wameling told police Levon disappeared two weeks earlier when Wameling left the baby unattended on the front porch wearing nothing but a diaper. Wameling said he left the baby alone while was trying to get back into his home after locking himself.

Police said Wameling came forward only after Levon's mother asked where her child was.
'Here’s the thing, we have a problem with what he says,' Utica Chief Mark Williams said at a news conference Thursday. 'Here’s a guy that waited two weeks to come forward. He doesn’t bring it forward to the police, but brings it forward to his parents. Instead he goes to an attorney's office. I think actions speak louder than words.'
On Friday, a state police helicopter hovered over the neighborhood where Levon was last seen, according to WKTV. State police K-9 units continued to search the neighborhood, walked to sniff streets and other wooded areas, but the dogs' efforts were hampered by bad weather, The Observer-Dispatch reported.

In addition to state and local authorities, the FBI, the National Center for Missing & Exploited Children, the U.S. Marshals Service and the Oneida County District Attorney’s Office have assisted in the search effort.
Williams told CNN that the father's delay is only making it harder for them to find the child.
'When you have a missing child, there's all these difficult cases,' he said. 'But when you're two weeks behind, it's nearly impossible.'
Despite the father's 'suspicious' behavior, authorities' focus has been to find Levon.
'We obviously have very grave concerns about the child. First and foremost, is where this child?' Utica Police Sgt. Steve Hauck told YNN. 'We need to know what happened. Wherever the evidence leads us is where we're going to go. If we find a crime was committed, then we're going to take appropriate steps to bring that person to justice. But right now, our biggest concern is finding this child.'
Though he is not a suspect, police said they are are treating Wameling as a 'person of interest'.
'The last we left it with the father he asked for an attorney and no longer wanted to speak with us,' Williams told CNN Friday.

Levon was staying with his father while Warney was at a drug rehabilitation facility, police said Friday.
'As far as she knew, the child was being cared for by Jevon and was doing fine,' Hauck told The Observer-Dispatch.
Levon's father has a criminal history.
Wameling was charged with resisting arrest, escaping police custody and harassment in May 2010 after being arrested for allegedly possessing metal knuckles, according to WKTV. In 2009, he was convicted of marijuana possession. Neighbors told the station the cops were called to Wameling's home on a 'weekly basis' because of screaming.

Police are asking residents in the neighborhood where Levon went missing to search their backyards.
'I think that, more than anything, it’s a starting point,' Hauck told The Observer-Dispatch. 'It makes no sense to start out broad and make the search smaller. It makes the most sense to start small and go bigger.'
Police say that they have a lot of leads.
Levon has brown eyes, black hair and he is bi-racial, according to his missing poster from the National Center for Missing & Exploited Children.
Anyone with any information is asked to call Utica Police at 315-735-3301. 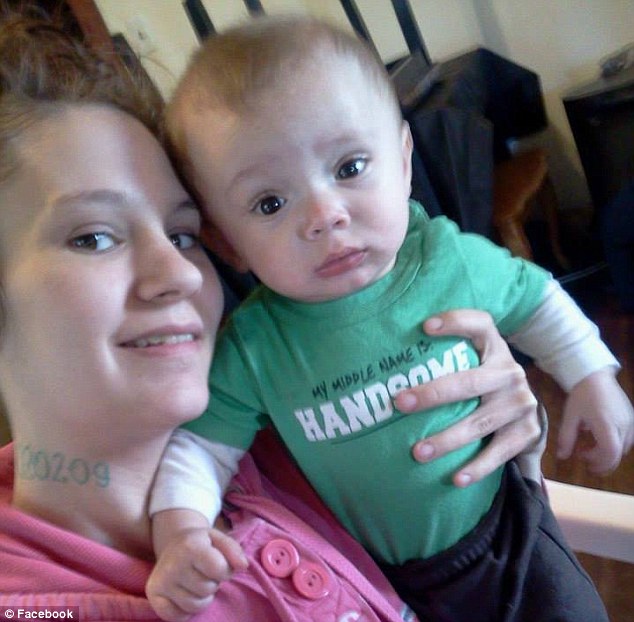 Poor little mite.
It doesn't sound too good, does it?