eddie wrote:It is such a shame that he mucked up his face.
I cannot believe that he has lost alot of money too....I used to love Michael Jackson. I think he has a great talent but he never had a childhood and this has ruined him. Your childohood years are SO vitally important - they shape you for the reast of your life. I feel a bit sorry for him really....

And here is an old one - go listen, it's really very nice...

Hi Eddie i'll join you for that dance...erm should i put my hand bag in the middle

I love his music :Nerd:


When paramedics arrived at his house he was not breathing, LA fire department captain Steve Ruda told the LA Times newspaper.

Jackson was given CPR by fire department paramedics as he was taken to UCLA Medical Center, the LA Times said.

The 911 call came in at 8.21pm from his Holmbly Hills home in LA, according to the TMZ website.

I will go and find out!!

Its on other news too!

We've just learned Michael Jackson has died. He was 50.

Michael suffered a cardiac arrest earlier this afternoon at his Holmby Hills home and paramedics were unable to revive him. We're told when paramedics arrived Jackson had no pulse and they never got a pulse back.

A source tells us Jackson was dead when paramedics arrived.

Once at the hospital, the staff tried to resuscitate him but he was completely unresponsive.

We're told one of the staff members at Jackson's home called 911.

La Toya ran in the hospital sobbing after Jackson was pronounced dead.

eddie wrote:They are reporting it on Newsnight here - it is still unconfirmed....

OMG this is confusing! Is it true or not? 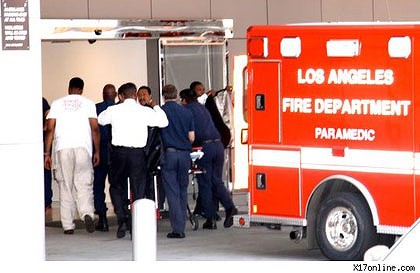 The Los Angeles Times newspaper is saying he is in a coma....

Reuters saying he's dead but not 100% sure either!

it is true. REST IN PEACE MICHAEL.

I just cannot believe this

My thoughts are with his children and family

I really loved his music. So many memories

This is so shocking


Many years off fantastic music.

Why is it all the greats are taken so young?

I have to admit that he was a great singer and entertainer. RIP

This is unbelievably sad and now it looks like it might have been his doctor's fault ... what a tragedy.

Number of posts : 4300
Age : 48
Location : Cave of the MOUNTAIN OF THE 3RD WORLD - PORTUGAL - St Gerald i am sending your goats to you again
Warning :

voice of logic wrote:This is unbelievably sad and now it looks like it might have been his doctor's fault ... what a tragedy.

Thats what my boyfriend said he heard on the news just before we went out to dinner!

voice of logic wrote:This is unbelievably sad and now it looks like it might have been his doctor's fault ... what a tragedy.

Thats what my boyfriend said he heard on the news just before we went out to dinner!

Is the doctor still missing???

Hundreds of Michael Jackson fans have danced in the streets of London to celebrate their hero's life.

At a "flash mob" gathering held outside Liverpool Street station the crowd cheered and held Michael Jackson pictures in the air as the party started with Billie Jean, followed by Thriller and Bad.

Scores of mobile phone cameras were lifted into the air filming people dressed in the superstar's attire and singing his most famous hits.

After the third and final song, Bad, was played, the fans booed and started chanting: "We want more."

To the delight of the spectators, Billie Jean was played again and a small circle was formed in the middle of the crowd for people wanting to show off their moonwalking talent.

A picture of Jackson is held high

After the event, some fans went to a pub to have a celebratory drink and toast the star.

The event was organised by Milo Yiannopoulls who invited people through social networking sites Facebook and Twitter to moonwalk for Michael.

He said: "Somebody said it as a joke on Twitter at about nine thirty this morning that we should do this mass thing in Liverpool Street station.

"I thought that's funny, and then a couple of minutes later, I thought no let's actually do it."

"Well obviously everybody's interested in the scandal and controversy, but really I think his legacy is the music, as we're here to enjoy the music."