Timelines written by Russell O'Brien. In his rogatory interview he states:
But anyway Dave PAYNE said to, erm, there were two members of the PJ had arrived, there was a guy I remember being almost shaved bald head, quite dark complexion, and a second one who we kind of nicknamed ‘baby face’ who did our fingerprinting about a week later, erm, and those two were there and Dave was, was saying, you know, ‘Shouldn’t we’, you know, ‘Why are we sitting here, shouldn’t you be on the radio, shouldn’t there be more people here, shouldn’t there be’, you know, ‘this should be on the radio, it should be on the television’ and, erm, I recall ‘baby face’ or his colleague saying ‘No media’, and, you know, and that was full-stop and then turning round to me writing the timeline and saying ‘That’s what we want’, fair enough. Erm, huh, and that’s really it. 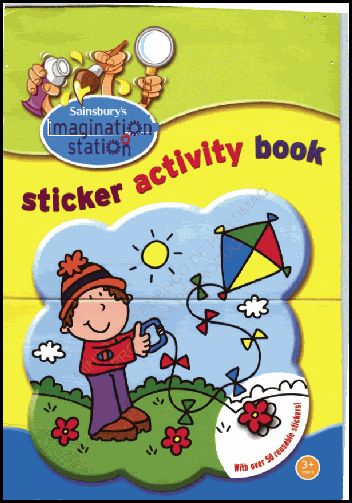 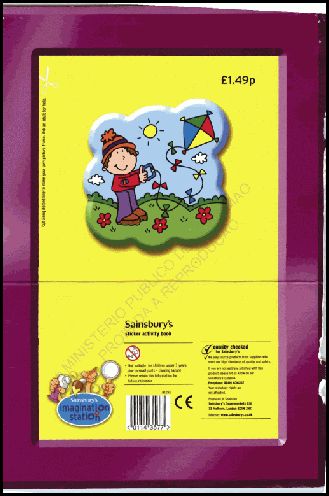 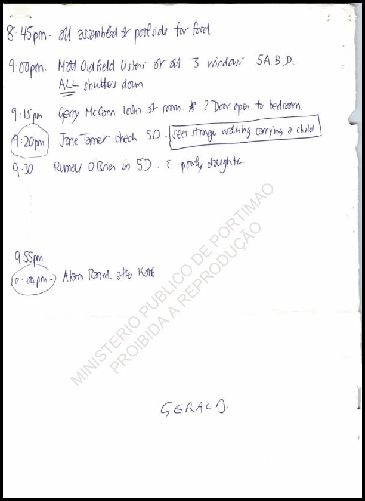 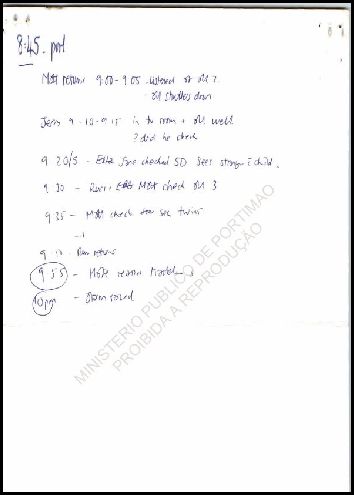 Re: The Tapas Timeline

Times shown are approximate, but accurate to the best of our knowledge.

2030: Standard booking for meal at Tapas restaurant for group - same all week (Sun-Thur)
2035: Gerry McCann (GM) and Kate McCann (KC) arrive at table at Tapas Restaurant.
2040: Jane Tanner (JT) arrives, followed shortly by Matthew Oldfield (MO) and Rachael Mampilly Oldfield (RMO).
2045: Russell O'Brien (RJO) arrives at table.
2055: MO returns to apartments to check on ground floor flats, passing David Payne (DP), Fiona Payne (FP) and her mother Dianne Webster (DW) on their way down to the table.
2057: MO listens outside all ground floor flats' windows on the car park side of the apartment (5A, 5B and 5D) to make sure they were asleep. At this time, all the shutters were down on each window.
2100: MO return to the table. Starters were ordered.
2105: GM returns to his flat (5A) and enters via the patio gate entrance. This and a child gate at the top of the stairs were closed at the time. He enters the flat via the patio door which is closed but unlocked.
The door is slightly ajar (about 45 degrees) which is unusual. All the 3 children were present and asleep. GM believes the shutter was down. The room in which the children are asleep is completely dark. On leaving the room, GM shuts the door to approximately 5 degrees. He then goes to the toilet to urinate.
2115: JT leaves table, and sees GM talking with fellow resident (&quot;Jez&quot; Wilkins) outside the patio gate of 5A. The two were standing just up the hill from the gate towards Rua A. da Silva Road. She did not speak to GM as she passed.
As JT continued up the hill towards the junction with Rua A. da Silva, she sees a man carrying a child in his arms crossing left to right from the apartment side continuing east along Rua A. da Silva in the direction of the &quot;Millennium Restaurant.&quot; He was on the same side of the road as JT 5-10 metres ahead of her.

Description of Man:
- Age 35 to 40.
- 1.7m tal1 approximately with a slim build.
- Good head of dark glossy hair, with possible flick of hair to the right. The hair was longer at the back (i.e not clippered or shaven).
- The central and the left side of the face were not seen.
- Full length trousers, casual, the material hanging without creases. The colour was possibly a browny mustard. They were not jeans.
- Long sleeved jacket, fastened at the front, possibly by a zipper. It had a gathered lower hem and was also possibly brownish in colour.
- Shoes may have been a semi-formal brogue.
- Whether he was wearing gloves or not could not be ascertained.
- He was not wearing a rucksack or any other identifiable objects.
- He was only carrying a child, with the head against the left upper chest away from JT and the feet to the right - i.e. cradling the child like a baby.
- He appeared to be walking in a rush to get somewhere.
- He was not someone JT recognised from the week.
- He was not dressed typically for a &quot;tourist,&quot; or at least his clothing did not seem to be of UK origin and may well have been purchased in Portugal.

- The child appeared to be a Caucasian girl about the ages of 3-4.
- She was seen to lie motionless/limp in the man's arms consistent with her sleeping or possibly drugged.
- She did not seem to be wrapped up well for the time of night wearing only pyjamas; the trousers were lightly coloured with a floral element, possibly with turn-ups. The top was not well seen though there was thought to be
another colour involved possibly pink.
- She was not wearing shoes.

JT checked only 5D entering via the deadlocked door on the car park side of the apartment. Both children inside were asleep. She did not check 5A or 5B.

2120: JT then returns to the restaurant, by which time GM had also returned. The entire party then begins eating their starters which have arrived.
2125: After starters, MO and RJO go back to the apartments via the car park entrance to check all flats. They go first to 5D where RJO's daughter E**e is heard crying. RJO enters flat, whilst MO checks inside 5B, and then returns to 5D.
2130: RJO remains in 5D as daughter has vomited. MO goes to check on 5A via the patio gate entrance. The outside gate is probably shut, but the child gate on the stairs up to the patio is possibly open. The patio door is closed but unlocked.
MO enters flat, hears a sound in the children's bedroom that is probably one of the twins rolling over in their cot. He does not enter the bedroom but can see through a now quite open door (greater than 45 degrees) into the room.
He sees the two twins in their cot, but does not check Madeleine formally as no sounds and twins asleep. He recalls the room did seem lighter than expected, perhaps suggesting the shutter had been raised or the curtains opened?
2135: MO returns to restaurant table, by which time main courses are arriving or being eaten. MO tells JT that E**e unwell.
2140: JT returns to 5D to take over care of E**e from RJO.
2145: RJO returns to table to eat main course leaving JT in 5D.
2155: RMO asked time at table. RJO's main course arrives.
2200: (approx): KM leaves table to check children in 5A. The patio gate is closed and the child gate is also probably closed. She enters through the closed patio entrance, with the curtains closed. She crosses the living area, and there is no noise from the children's bedroom. She is about to leave, when she notices the bedroom door was
open (approximately 60 degrees).
She starts to close it and it slams. Considering the patio doors had caused a draft, she checks these doors but they are closed. KM returns to the bedroom and opens the door to check the children were not disturbed by the noise.
At this point, she notices that Madeleine is missing. She checks the other single bed in the room and also Kate and Gerry's beds. Then she double checks that Madeleine was not in her bedroom again. At this point, she notices the curtains blowing fonvard with a gust of wind. She runs over, pulls open the curtain and notices the shutter was
completely raised, and the window pushed open to the left as far as possible.
She then completes a check of the bathroom, kitchen and wardrobes.
On failing to find Madeleine, she runs to the entrance of the restaurant, shouting from the path leading to the restaurant area raising the alarm that Madeleine was missing.