Carina Ferreira is missing since Saturday the 1st of May. She's 21 years old. Till I have time to translate it, here's two links in Portuguese, being one of them, a page on Facebook started by her friends, in order to find her: Number of posts : 11477
Age : 61
Location : Spain. The place where children are welcome in tapas bars
Warning :

God she is beautiful. I hope she is found soon

What a pretty young lady. I too hope she is found soon. I haven't seen it reported in any of the papers.

fred wrote:What a pretty young lady. I too hope she is found soon. I haven't seen it reported in any of the papers. 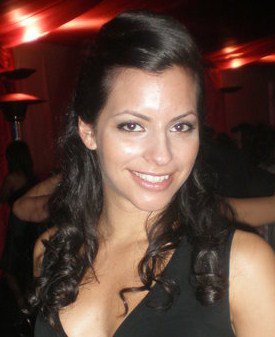 There's very few about her on the Net yet, and there's probably too many things that weren't made public so far.

Instead of translating a full webpage, here's some tips about her story:

Carina Ferreira of 21 yrs old, lives in Lamego, a city in the North of Portugal. She has graduated on "Tourism" by the University of Coimbra and she was working in "Clube de Caça e Pesca da Régua" (Club of Fishing and Hunting from Régua - a nearby town).

On Saturday (the 1st of May) she has worked till 22pm and went home to take a bath and get dressed for a party in Régua. She wore black leggings, a black brouser and a blaser from the same colour. She left home to attend the party, driving her red Peugeot 106, Plate 77-23-LP, but she has never arrived to the party. Her friends waited in vain for her, and started to call her mobile phone with no luck.

There are no reports of an accident, there's no fine to anyone driving this car, nothing. Carina and the car she was driving, seemed to vanish without a trace. It was thought it could be good to launch a search on the Douro River, but it was determined no car has gone to the waters.

Some people say as she is a very young beautiful lady, she could have been a victim of someone. There are also rumours saying she was dating secretly a boy from the Rangers of Lamego (a special Unit from the PT army) but there's no confirmation about it, and it can be just nothing but a rumour.

I personally hope and pray this woman can be found soon, safe and sound.

Thanks for the update FS. I really hope this girl turns up safe

What a baeautiful looking lady.
I hope she is found safe and well.

The focus is also to find her car, the red Peugeot 106.

This is the place from where she went missing. With "1" is marked the place she left, and with "2" the place to where she was going. The road is marked "A24" (a motorway).

She was seen by a filling station's worker, driving her red Peugeot, Plate 77-23-LP, right after she left home heading to the party. 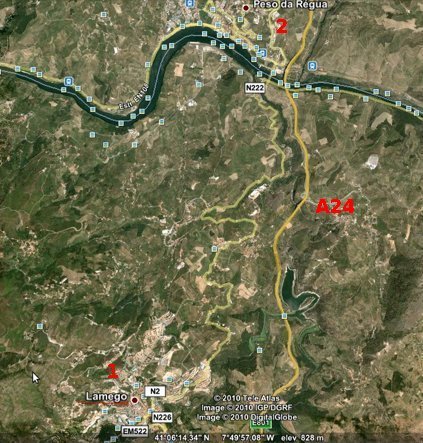 The latest news are not very promising, unfortunatelly. The registration of her mobile phone and its latest data, points out to an area between a river and a bridge, very close to an hydroelectric. After searches with an helicopter, divers were now called to search the river in that area. 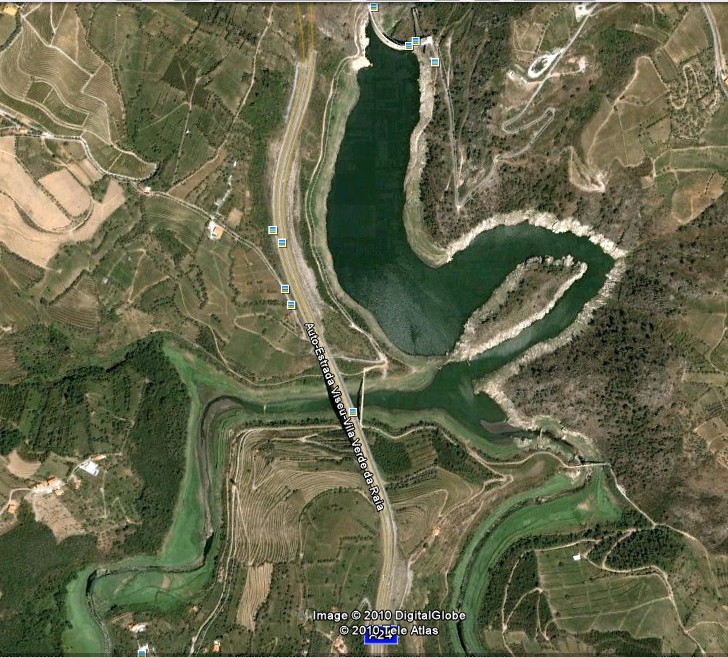 FSoares wrote:The latest news are not very promising, unfortunatelly. The registration of her mobile phone and its latest data, points out to an area between a river and a bridge, very close to an hydroelectric. After searches with an helicopter, divers were now called to search the river in that area.

Oh no!!!
Only thing is if her body is found her family will get closure.

I understand police keeps two possibilities open: 1) she has crashed and fell in the waters, near the hydroelectric - area given by cell phone triangulation. However there's no sign anywhere of a car crashing. No vehicle was found in the waters, despite the searches that are being performed by the divers since yesterday, using tools from the Navy to help.

2) If no car is found in the next few days, the possibility of a crime will grow.

Whatever happened, God bless this young woman and let's pray some clues are found.

Correio de Manha, said that the river Douro has been dredged and nothing at all has been found. The photo of her grandad is very upsetting, the family are as you can imagine beyond upset, they just want to find her of course.
These cases are the worse, no one knows anything, there is just speculation, rumours and gossip. I hope this lovely young lady is found soon, someone must know something, it sure looks like it isn't an accident, otherwise some kind of evidence (the car) would have been found by now.

Hoping Carina Ferreira is found safe and well and wishing her family/friends strength and courage.

No news of the lovely lady? God bless her and her family.

There are no news, so far. As Fred said, the river was dredged, the hydroelectric was stopped to allow a search, and nothing.

It was created a special team for this particular case as it's classified as "crime" now.

Her body was found this afternoon, still inside the car. A team of officers from PJ, went down to a rocky cliff using the rappel system. They found her car with her body inside, in a hidden area. It all seems she has suffered an accident and went down that cliff.

May she rest in peace!

So sad. May she rest in peace.

I'm glad she has been found, but I'm glad also it was a tragic accident, the alternatives are to awful to contemplate.

The mind of a human being is always a sophisticated mechanism. When people are young and happy, they think they're immortals and have no notion of danger. They sometimes live in the limit.

She was late to the party she wanted to attend and she must have stepped firmly the accelerator of that tiny Peugeot 106. What happened just God knows, but fact is, she has passed over the safety rails of the motorway and a net of 5 meters high, like flying directly to a cliff of 40 meters high, being unfortunate enough to "land" inside bush and trees, that hid the car during all this time (the car looks like being just 2/3 of its original shape and size), despite all the helichopters flying over the area, trying to locate her car. And this must be the reason why there wasn't a single sign in the motorway, of an accident.

May all young adults and teens learn from this event. Exceeding a lot the speed limit, is always a danger. Like so many say "it's better to lose a second in life, than life in a second".

According to reports, her seat belt was still on and she was killed immediately. I hope that is true, it must bring a teeny bit of comfort to her family rather than she was sat suffering whilst the rescuers searched for 37 days for her. Life is so short, it is an event happening like this, that makes you sit back and think how fragile we all are.