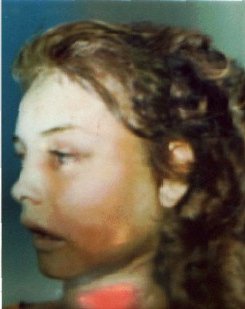 Walker County Jane Doe was found lying face down and nude by a truck driver on November 1, 1980 near the Sam Houston National Forest in Walker County Texas. This is about a half mile south of the FM 1696 exit near Huntsville.
The victim, an attractive young teenage girl, had been savagely beaten and sexually assaulted before dying by slow strangulation. Her face and body were covered with bruises from the beating and there was a human bite mark on her back near her right shoulder. The autopsy revealed she had been sexually assaulted with a blunt instrument.
When the murder was reported, several people came forward and said they'd seen a teenager matching her description the day before her body was found. One witness, the manager of a gas station which no longer exists, positively identified the victim as a girl who had been at the station around 6:30 p.m. Halloween night asking for directions to the Ellis prison unit. She was wearing blue jeans, a yellow pullover sweater with big pockets that hung below her waist, and carrying high-heeled sandals in her hand. To the best of his recollection, she had been let out of a 1973 or 74 blue Chevrolet, possibly a Caprice, with a lighter colored top, which was being driven by a white male. She looked disheveled like she had been traveling and perhaps sleeping in her clothes. She left the station, walking north on Sam Houston avenue.
A waitress working at the Hitchin Post truck stop out on Interstate 45 said the girl came into the restaurant the same evening and again, asked for directions to the Ellis Unit, saying she had a friend there. A map was drawn for her and she departed. She never reached the Ellis Unit and she was never seen alive again.