PLAGUE OF LOCUSTS IN AUSTRALIA

PLAGUE OF LOCUSTS IN AUSTRALIA

As if we didn"t have enough to worry about with Floods and Fires around the World threatening food supplies,
another Country faces a possible disaster.


Australia's Darling river is running with water again after a drought in the middle of the decade reduced it to a trickle. But the rains feeding the continent's fourth-longest river are not the undiluted good news you might expect. For the cloudbursts also create ideal conditions for an unwelcome pest – the Australian plague locust.


The warm, wet weather that prevailed last summer meant that three generations of locusts were born, each one up to 150 times larger than the previous generation. After over-wintering beneath the ground, the first generation of 2010 is already hatching. And following the wettest August in seven years, the climate is again perfect. The juveniles will spend 20 to 25 days eating and growing, shedding their exoskeletons five times before emerging as adults, when population pressure will force them to swarm.

It is impossible to say how many billions of bugs will take wing, but many experts fear this year's infestation could be the worst since records began – 75 years ago. All that one locust expert, Greg Sword, an associate professor at the University of Sydney, would say was: "South Queensland, New South Wales and Victoria are all going to get hammered."

A one-kilometre wide swarm of locusts can chomp through 10 tons of crops – a third of their combined body weight – in a day. The New South Wales Farmers Association said an area the size of Spain was affected and the Government of Victoria alone forecasts A$2bn (£1.2bn) of damage.

Though locusts move slowly when the sun's up, at night they can fly high and fast, sometimes travelling hundreds of kilometres. "A farmer can go to bed at night not having seen a grasshopper all year and wake up in the morning to find his fields full of them," said Professor Sword.

All locusts are grasshoppers, but not all grasshoppers are locusts. The difference is a suite of genetic changes that kick in when population densities cross a critical threshold. In some species, they produce physical transformations – the desert locust of North Africa goes from green to black and yellow, for example – but the Australian plague locust merely reprogrammes its behaviour, from solitary to gregarious.

Swarms probably make use of the available food more efficiently as the leading edge is constantly pushing forwards into new vegetation. It may be fear more than hunger, however, that drives the locusts.

Locusts are highly cannibalistic, says Professor Sword, and any that stay still too long are likely to get nibbled. "Swarms are like lifeboats," he says, forging a gruesome metaphor. "If you're the only one in the boat, you could easily starve. But if you've got lots of company, you could be the last to survive. We call it travelling with your lunch."

Controlling the bugs involves spotter planes identifying juvenile bands that can be targets for attack by crop sprayers armed with pesticides. But eastern Australia is struggling to find enough pilots to take on all the work.

And the spraying itself comes at a cost. Apiarists have complained that their bees are in danger from pesticides and ecologists fear for the many animals that treat the locusts as a moving smorgasbord. Concerns have also been raised by bloggers and activists that some of the chemicals used could harm humans.

The best hope for phasing out the chemicals comes from research. But the goal, says Professor Sword, is control not eradication. "They were here long before humans arrived," he said.

Didnt the farmers have a plague off mice at one time...i saw it on tv.....thousands off thousands off mice flitting around everywhere on this farm!!

kitti wrote:Didnt the farmers have a plague off mice at one time...i saw it on tv.....thousands off thousands off mice flitting around everywhere on this farm!!

Don"t remember seeing that, the way things are going we might be eating them.

kitti wrote:Didnt the farmers have a plague off mice at one time...i saw it on tv.....thousands off thousands off mice flitting around everywhere on this farm!!

eww, yes, I remember seeing that kitti. Don't remember where it was though?

The mice look quite sweet lol

You can apparently eat some sorts of locusts. When we were in Haifa, Israel caught the tail-end of a locust swarm that was right over the Lebanon, and a couple of locusts came in our window and landed on our bed. Somebody looked at them and said, "oh that is the sort of locusts that the Yemenis eat" (apparently they have a different number of legs or something) and you know what, it didn't even look even remotely tasty.... I have also seen them in the reptile shop where we go to get turtle food. They look disgusting.

We get the locusts here too, I think they are Egyptian locusts, but they are quite disgusting and strip plants in seconds. They are also difficult to kill, even after being battered with a baseball club they seem to recover and take off again like helicopters. This year the vile things were using our garden as a breeding ground. 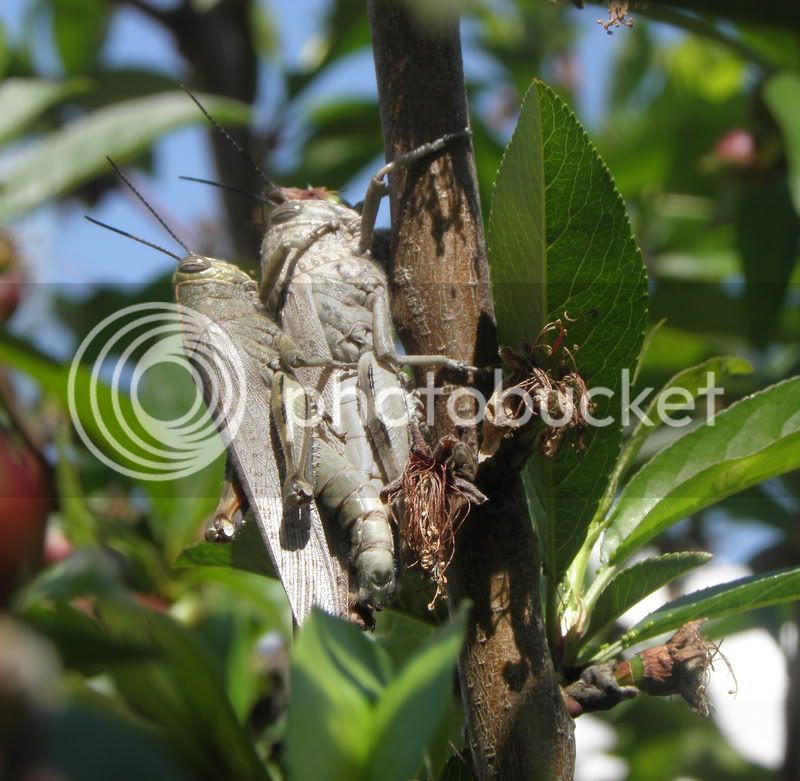