Whatever you may think of Kate and Gerry McCann's parenting skills while on holiday in the Algarve in May 2007, you have to admit their efforts to keep their missing daughter in the public eye have been remarkably successful. Four years on, the welter of publicity garnered for Kate's book, Madeleine, has been astonishing. To cap it all, the McCanns have now persuaded the British Prime Minister and Home Secretary to ask the Metropolitan Police to review the case.

One aspect of the publicity that seems strange when viewed from Portugal is the degree to which the British press and government officials believe Madeleine was abducted. The McCanns have insisted all along that their daughter was taken from the Algarve holiday apartment while they were dining out in a nearby restaurant and that she may be still alive. The more prevalent belief in Portugal is that she died in the apartment and that talk of abduction is a cover-up.

Led by book serialisations in The Sun and the Sunday Times this week, the British press has been pumping out stories that accept Madeleine was abducted, not as a possible or even probable scenario, but as an established fact.

“The Government’s primary concern has always been and remains the safe return of Madeleine,” said a Home Office spokesman yesterday. But is she still alive?

Perhaps Madeleine really was abducted, but the truth is we simply don't know for sure what happened to the four-year-old back in May 2007 because conclusive evidence has yet to be found.

Said British Home Secretary Theresa May last night: "I am pleased to announce that the Prime Minister and I have agreed with the Metropolitan Police Commissioner that the Met will now be using its particular expertise to review the case. The Met have skills, techniques and know-how which we hope can bring a new perspective to the case."

No doubt that know-how will mean the Met will remain unbiased, ignore the hype, cut through the conjecture, look for solid evidence and focus on facts. Meanwhile, the British government has felt obliged to say its decision to send in Scotland Yard was not driven by tabloid headlines.


Although the official Portuguese police inquiry formally ceased in July 2008, the Portuguese authorities will retain the lead responsibility for the case. The Pólicia Judiciáia have been repeatedly accused in Britain of botching the investigation, but only with their close co-operation can the Met hope to help solve this mystery. 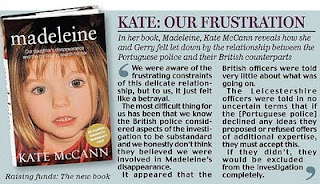