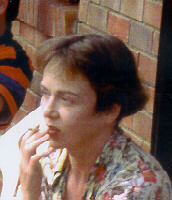 Gardai at Terenure Station are seeking assistance in tracing the whereabouts of Eva Brennan of Madison House ,Terenure. She is missing since the 25th of July 1993.

At the time of her disappearance Eva was described as being 40 years of age but looking younger, 5'7" ,of slim build and having short mid brown hair and blue eyes.

When last seen she was wearing a pink tracksuit and leggings, she wore a man's wristwatch with a brown strap and carried a red leatherette handbag about 8"x10" with a flap to the front.

Anyone with information should contact the Gardaí at Terenure Station telephone 01-6666400 or any Garda Station..

LARRY Murphy, the now 43-year-old Wicklow man who was found guilty in May 2001 of the abduction, rape and attempted murder of a Carlow business woman, remains a prime suspect in the disappearance of at least three women.