Cameron's Pledge on Europe and other broken promises 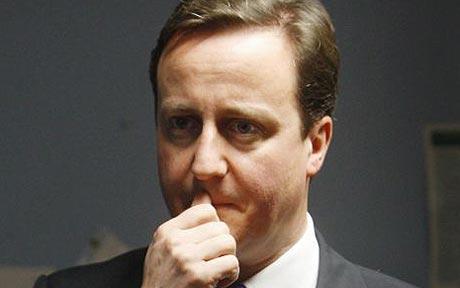 Conservative Right rues Cameron's broken promises
David Cameron's failure to honour his promises on Europe is one of several areas where the Tory right, massing in numbers to defy him on the issue in a Commons vote tomorrow, feel let down. Is this typical of a wider failing of the Prime Minister?

By Edward Malnick and Patrick Hennessy8:45AM BST 23 Oct 2011
The Sunday Telegraph has analysed his six party conference speeches in his six years as leader, and has examined 24 clearly definable promises.
Of these 14 have been kept, some of which appeal to all sides of his party, such as a cap on non-EU immigration and the abolition of ID cards.
Others, however, might appear designed to please centrist or even centre-left Tories, including protecting spending on the NHS and overseas aid from cuts, introducing a pupil premium, backing civil partnership and keeping the minimum wage. These are, of course, simpler to introduce when the party is in coalition with the Liberal Democrats.
However, another 10 have either been broken or not yet acted upon - and these tend to be the policies the Tory Right would favour.
Here we reveal the gap between Mr Cameron's rhetoric and reality.
RELATED ARTICLES
Cameron reneges on Lisbon Treaty vote pledge 02 Nov 2009
Cameron commits to marriage tax breaks 05 Jan 2010
Fewer criminals will go to prison, says Clarke 29 Jun 2010

Rhetoric 2007: A promise to pressure Labour to hold a referendum on the Lisbon Treaty, which handed more powers to Brussels:
We will keep pushing for that referendum, campaign for a No Vote and veto that constitution.

Reality: Gordon Brown signed the Treaty later that same year without holding a referendum. Mr Cameron offered a "cast-iron" guarantee of a referendum - but abandoned the pledge six months before last year's general election and has resisted calls from eurosceptics for a retrospective test of national opinion.

Rhetoric: 2007: A promise to pull out of the Social Chapter, which imposed far-reaching European business regulations, including working conditions, and employment and trade union rights, on Britain:
We will get out of the European
Social Chapter.

Reality: Regulations previously contained within the Social Chapter are now wrapped up in other European treaties. A spokeswoman for the Department for Business, Innovation and Skills said some were still under negotiation in Europe: "The Coalition will be part of those negotiations." Translation: Don't hold your breath.

Rhetoric: 2006:
We will abolish the Human Rights Act and put a new British Bill of Rights in its place.

Reality: The Human Rights Act remains. The Liberal Democrats will fight to keep it. Mr Cameron has asked a panel of lawyers and academics to examine the proposal for a Bill of Rights in detail and report to Justice Secretary Ken Clarke by the end of 2012.

Rhetoric: 2011: A clampdown on bogus colleges, fake marriages and immigrants who overstay their visas was promised. Mr Cameron also said:
The criminals who use the Human Rights Act to try and stay in the country - we are clamping down on all of them.

Reality: Since May 2010 the Border Agency has revoked the licences of 97 colleges it believed were fronts for illegal immigration, but proposals to tighten up checks on relationships are still in the planning stage. And, as we report elsewhere today, foreign criminals are continuing to exploit the "right to a family life" enshrined in Article 8 of the Human Rights Act to avoid deportation.

Rhetoric: 2006: A promise to overhaul and expand the prison system.
We want to build more prisons and reform the ones we've got.

Reality: The Government is not planning to build a single new prison. Justice secretary Ken Clarke claims the prison population is "unsustainably high" and is trying to reduce it by cutting the number of short-term sentences. Instead, the emphasis is on a "rehabilitation revolution". Drug and alcohol addiction is being tackled in prisons and independent providers will be paid to reduce re-offending.

Rhetoric: 2007: In the wake of Labour defence cuts, a promise to increase the size of the army.

We will never be able to improve the welfare of our forces unless we also look at expanding our Army. I am delighted that Liam [Fox] has made his priority restoring the three battalions that should never have been abolished.

Reality: No battalions were restored to the Army. In fact, military commanders estimate that up to eight of the existing 36 battalions could be lost as the Army shrinks to 84,000 by 2020 – its smallest size since Victorian times – relying on an enlarged reserve force.

Reality: Despite a number of hints and suggestions, no firm proposals have yet been presented to explain how this will be done. There have been indications that the move is planned within the lifetime of this Parliament, but it is growing less and likely.

Rhetoric: 2007: Mr Cameron told the story of a constituent who paid into his company pension scheme for 40 years only for the company and the scheme to go bust, saying he was one of many. Turning to George Osborne, he said:
So George, your first task when we win the election is to set up a lifeboat fund, and give those 125,000 people the support and the money that they deserve.

Reality: No such fund has been introduced. Instead, the Government has continued two schemes set up by Labour before 2007 to compensate people whose pensions could not be paid out as a result of their employers becoming insolvent.

Rhetoric: 2007: Mr Cameron said he wanted to help young people who could not get on the housing ladder:
We are going to cut stamp duty to show that we're on their side.

Reality: There has been no overall reduction in stamp duty. The only change has been altering stamp duty for property investors buying multiple homes.

Rhetoric: 2008: A recognition that business taxes had become so complex they were a nightmare.
We'll get rid of those complex reliefs and allowances and use the savings to cut corporation tax by three pence.

Reality: Corporation tax was cut in this year's budget by 2p with a phased reduction plan for the next three years. The Chancellor introduced the Office of Tax Simplification to advise on ways to simplify the tax system.
Share:

Cameron: 'Fox has recognised his mistakes'

Letwin: 'binned papers were weighing me down'