Amy's cousin Beverley is looking to re-release a song she believes will help the search Amy.

Beverley co-wrote the song 'Rainbow' which is being adapted to portray the heartbreak of amy's Family.

Beverley had a close relationship with her younger cousin when Amy was growing up in Clare Hall in Dublin before Amy went to live in Spain with her us.

Beverley hopes that her song will help keep the search alive in people's minds and also raise funds to continue the campaign to find Amy and other missing youngsters. The Song was one of Amy's Favourite Songs and the lyrics capture exactly what we are experiencing at this time.
The song has been adapted for a new release. The beat and the backing vocals have been removed and the adding of strings makes the song even more poignant and beautiful.
Beverley hopes the campaign to promote the song, including the CD cover and promotion posters, will help keep Amy in the minds and hearts of as many people as possible and to keep her search in the spotlight

"Amy was a mini-me in some ways because she was always singing and dancing. She was so excited when I started up in a band. She loved playing 'Rainbow"

We need between 6000 and 8000 euro to have the cd produced and we are hoping someone somewhere will help us to get it produced for Amy.


By Kevin Doyle and Cormac Byrne

A Dublin popstar has died in a tragic car crash in India.

Beverley O'Sullivan (28) who was a former star with Irish group Fifth Avenue is being mourned by the Irish music industry today.

Westlife's Nicky Byrne and Mark Feehily have both spoken with shock about her untimely death.

Beverley toured with the Irish pop group for three years, supported 'Shaggy' and performed alongside international acts such as Shakira.

The 28-year-old died after a car accident, five hour outside New Delhi. It is understood that she was travelling with her boyfriend when the tragedy struck.

The couple left Ireland on Sunday for a six week break and had hired a car and driver for the first four days of the tour.

Her boyfriend is understood to have been taken off the critical list.

Tragic Beverley was involved in the music industry for 10 years and has received several awards including Gold and Platinum discs for her time with the Irish pop band Fifth Avenue.

She was a good friend of Westlife and today band member Mark Feehily said that she sung alongside him at his cousin's wedding during the summer.

"She was gorgeous and talented," he said.

Her grand-uncle Philip O'Sullivan told the Herald today: "It's tragic. I can't believe. We are all so shell shocked."

Beverley's devastated parents Eoin and Beverley live in Donaghmede and are preparing to fly out to India today.

Her Facebook page had to be temporarily taken offline so that he could be told before finding out online.

Dozens of tributes have since been posted on the site from friends, including ex-band mate Mark Walton who wrote: "Rest in peace Beverly.I love you and I will miss you forever... Thank you for the great memories we shared in Fifth Avenue.I may have lost a friend but I gained an angel... Love you always, Mark x."

Since the band split, Beverley has craved a successful career performing at private functions and church ceremonies.

Among the highlights of her short careers was a three year stint touring as support for Westlife. She also performed alongside stars such as Lenny Kravitz, Shakira, Tina Arena, Blue and the Sugababes at NRJ Concerts in France, Sweden & Denmark.

The young star appeared on TV shows in interviews with the band on Ireland AM, The Den, The Lyrics Board, The Disney Channel in France and the Bingo Lotto (the most popular show in Sweden).

At one stage, she also presented a lunch radio show with Phil Cawley on Today FM.

According to her official website: "Beverley has just finished her first movie in the new Irish movie Happy Ever Afters, in which she plays a cabaret singer and also recorded and sang six songs for the soundtrack!"

The Department of Foreign Affairs has been offering consular assistance to her family.

Beverley O'Sullivan, who was in her 20s, died yesterday in a car crash in the Bharatpur area, about 50km from Agra.

She was a singer and performer with the Irish pop band, Fifth Avenue.

AdvertisementThe Department of Foreign Affairs has confirmed that the Irish embassy in India is providing consular assistance to her family.

A man who was travelling with her at the time was injured in the crash. 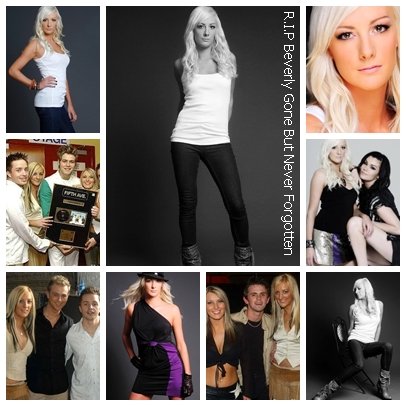 The Mum of Missing teen Amy Fitzpatrick has been left reeling by the death of the pop star niece she regarded as "one of her babies"
Tragic Beverley O Sullivan 28, was killed in a horror road smash in India while on holidsy with her Boyfriend.
The couple who had hired a driver for a monday evening sightseeing trip, were en route to see the taj Mahal temple near Agra when the accident happened.

As Beverley's parther Steven Reeves, 32 was taken off the critical list yesterday, the singers heartbroken parents Eoin and Bernadine flew out to India to bring her body home.
And last night close familt friends of Audrey Fitzpatrick 40 revealed how beverley had recently penned a fundraising song for her cousin Amy, who vanished in Spain in January 2008.
THe two girls had become very close growing up in Coolock before Amy moved with her Mum Audrey and partner Dave Mahon and brother Dean to the costa del sol.
One friend tole the Irish Sun " Audrey feels like her daughter has died, she is simply devastated.
"Beverley and Amy were so close like sisters- exactly the same as each other.
"Amy adored her and Beverley meant the workd to all of us. She was a gorgeous girl who had everything. " A beautiful person with a heart of gold and the voice of an Angel.
"For Audrey its like she has lost two of her babies"

Plaitnum record selling Beverley, who notched up 5 top ten hits with Fifth Avenue, had been hoping to release a version of the groups teack Rainbow in honour of her adoring cousin.
Last year she told the IRISH SUN " I was going to write one starting from scratch but my mum said I should do a song that Amy loved off the Fifth avenue album.
"She was only 11 at the time and thought her cousin was a big pop star. And as I wrote rainbow on my own, it was her favourite song.
"I wanted to do something to come across from her mum Audrey's point of view-the way she was feeling.
Yesterday tributes to Beverley- in recent times a popular wedding singer and budding actress-flowd in from the music world.
Close pal and Westlife singer Mark Feehily who toured with the blonde said "She was gorgeous and talented"
And ex band member Mark Walton commented " I may have lost a friend but I've gained an Angel.

YOU CAN HEAR BEVERLEY'S SONG FOR AMY ON HER WEBSITE www.missingamy.net.

UNFORTUNATELY BEVERLEY NEVER GOT THE CHANCE TO RECORD THE SONG FOR AMY AS SHE DIED TRAGICALLY IN A CAR ACCIDENT IN NOVEMBER 2009.