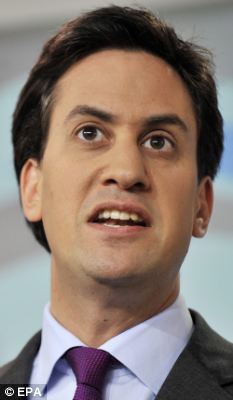 Ed Miliband has admitted that taxpayers have been forking out for his rent twice over.
The Labour leader said he only noticed the 'administrative error' relating to his Doncaster home yesterday, according to the Daily Telegraph.
And it was apparently left to his landlady to flag up the fact he had been overpaying for three months and return the money.
He had managed to unwittingly pay an extra £1,725 into his landlady's account, the newspaper reported.
An automatic payment from the Independent Parliamentary Standards Authority was understood to have been duplicated with another payment from Mr Miliband’s office.
A spokesman for Mr Miliband said: 'Ipsa acknowledged this was an administrative error.
'Ed Miliband at no time has overclaimed or had to pay any money back.'
Last night, Ipsa said there was a 40 per cent increase in the value of claims by MPs in June and July, compared with the previous two months.
MPs reportedly submitted 34,000 claims totalling £5.2million, compared with just 27,000 claims with a value of £3.5million in April and May.

More...
One MP a week buys an iPad and gives the bill to the taxpayer
Many are still said to be having claims rejected, after a tightening of the rules on what can be reimbursed.
In June and July, 13 MPs were refused payments of £13.50, which is a charge imposed by phone companies for late payment of bills, said the newspaper.
These included former Home Secretary Jack Straw and former Lib Dem leader Charles Kennedy.
Laurence Robertson, a Conservative MP for Tewkesbury, had the highest number of rejected claims.

Twice the price: Mr Miliband's landlady had to alert him to the fact he had overpaid on his rent at his Doncaster residence
He is understood to have had 11 taxi receipts totalling £90.50 refused for being 'not under scheme' or having 'insufficient evidence'.
Mr Robertson said last night: 'I understood they would cover certain taxi fares if there were no buses or tubes. But if that’s the rules, then fine. They say there hasn’t been a change but they have paid some claims like that in the past.'
More than £130,000 was spent on first class travel and more than £178,500 on business or club class travel.
Eight MPs claimed for iPads - in the case of Tory MP Bob Blackman, for his own secretary.
The new claims were revealed as former expenses compliance officer, Luke March, gave evidence to MPs about why he quit just four months into his job this August.

Will they ever learn? Revelations over MPs' expenses continue to emerge on a regular basis
He told the members' expenses committee that there was a 'climate of suspicion' at Parliament's expenses watchdog about his job and a 'lack of support'.
'There seemed to be more obsession with the process than there was with the result,' Mr March said.
Mr March said in July that naming MPs under investigation by Ipsa could be 'unfair' and suggested there should be no publicity at all if they were cleared.