By Simon Walters and Glen Owen

Tony Blair is facing questions after one of
his charities launched a bid to grab a slice of Britain's £8billion foreign aid
budget.

His organisation has taken the first steps to
become eligible for grants awarded by the Department for International
Development to rebuild war-torn countries.

The highly sensitive move has prompted
concerns over a possible conflict of interest with Mr Blair's complex business
dealings. 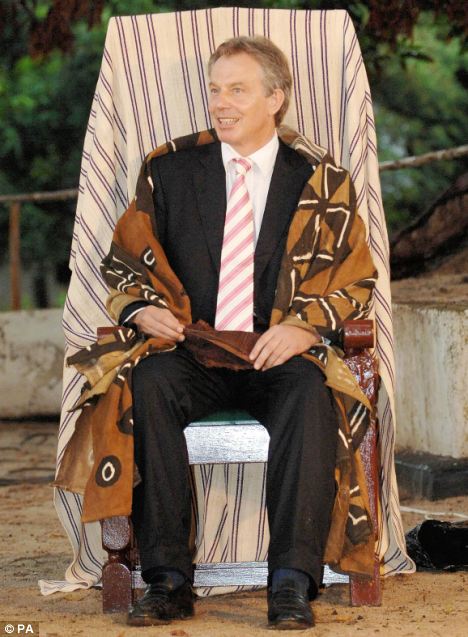 Tony Blair is being made an honorary Paramount Chief in
the village of Mahera in Sierra Leone. Of his estimated £7m-a-year earnings,
about £2m comes from merchant bank JP Morgan, which has major interests in many
of the countries receiving British aid


Of his estimated £7 million-a-year earnings,
about £2 million comes from merchant bank JP Morgan, which has major interests
in many of the countries receiving British aid.

Mr Blair's charity has applied to join the
tendering process for the Department for International Development (DfID)
'security and governance' scheme, which undertakes 'peace-building' work in
countries such as Iraq and Afghanistan.


The remit has raised eyebrows given the former
Premier's disastrous decision to back the Iraq War.

Last night, Conservative MPs said Mr Blair
must prove that the pitch would not conflict with his lucrative commercial
activities.

Tory Philip Davies said: 'This is a very
sensitive issue. The Government will have to be scrupulously careful with the
award of any contracts to Mr Blair to ensure there can be no possible conflict
of interest with his widespread business dealings in the Third
World.'

However, when asked about MPs' fears that the
application could conflict with Mr Blair's business activities, a spokesman for
the former Prime Minister said: 'On what basis do they claim there is a
conflict? There is none, and to claim or imply otherwise is
defamatory.'

Mr Blair has applied to be considered for
grants via the Tony Blair Africa Governance Initiative.


Curiously, the application has been made in
the name of the Tony Blair Governance Initiative, omitting the word Africa. Mr
Blair's spokesman said the charity only operated in Africa. 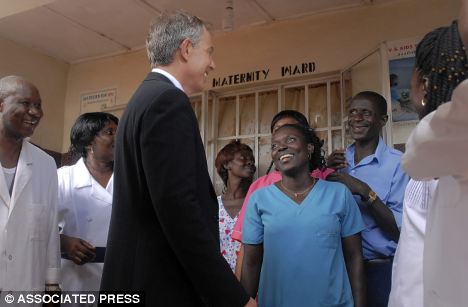 Ex-PM Tony Blair talks with health workers at Rokupa
Government Hospital in Freetown on a visit to Sierra Leone, where his charity
and JP Morgan operate, last year


The charity is run from the same office in
London's Grosvenor Square as his business empire, the Office of Tony Blair.

They share the same PO Box address in
Paddington and are registered at the same address near St James's Park. The PO
Box address is also shared by Cherie Blair's Foundation For Women
charity.

DfID – the Whitehall department whose budget
will rise to £11 billion by 2015 – is spending £787 million this year on
'governance and security' schemes.


Of this, £34 million is going to Afghanistan
and £1.7 million to Iraq. Large sums also go to African and other Asian
countries.

Individual contracts can be worth hundreds of
thousands of pounds. It is believed that some are worth millions, although a
DfID spokesman refused to confirm this.

A secret DfID document seen by The Mail on
Sunday shows Mr Blair's name on the list of those who have applied for 'Lot A'
of the DfID governance portfolio. If successful, his charity would then be on a
list of organisations eligible to bid for contracts as they came up.

Others on the application list include the
'Big Four' accountancy giants – Ernst & Young, KPMG, Deloitte and
PricewaterhouseCoopers – plus charities such as Save The Children and Christian
Aid. 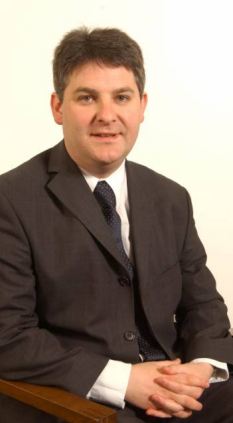 
The document suggests that Mr Blair's record
in Iraq and Afghanistan could be significant, as it states: 'Bidders should
describe their approach to operating in conflict-affected and fragile
states.'

A DfID guide says bidders must prove their
expertise in public sector reform and be able to help with 'the effective
functioning of the Cabinet and PM's/President's offices'.

That remit may raise eyebrows given that Mr
Blair was criticised for his record on public service reform and the way he ran
No 10, making key decisions with informal 'sofa diplomacy' sessions with his
cronies, rather than the Cabinet system.

He said 'The Tony Blair Governance Initiative
has applied . . . to be eligible to compete for a contract on public sector
governance.

'Their bid will be treated like any other and
judged on value for money and effectiveness. All DfID contracts operate under
strict rules designed to get the best for British taxpayers and deliver help to
the world's poorest people.'

Mr Blair has entered a three-stage tendering
process in which he must show he is fit to run a major overseas aid project with
public money.

If Mr Blair's bid is approved, he will then
face separate 'mini competitions' for individual contracts.

His overall finances are shrouded in mystery,
but it is understood that until now his charitable activities in the Third
World have been funded mainly from his lucrative commercial activities. Adding
Government money to this would represent a major expansion of his
empire.

Mr Blair is thought to have made about
£25 million since leaving office, but the opaque way his finances are structured
makes it almost impossible to establish the true size of his fortune. It is
known that his property portfolio contains seven homes, worth
£14 million.

The Tony Blair Africa Governance Initiative
(AGI) is part of the Byzantine structure of companies, partnerships and
consultancies constructed by the former PM.

At the centre of the web is the Office of Tony
Blair, based in Grosvenor Square, London, which co-ordinates all his activities. 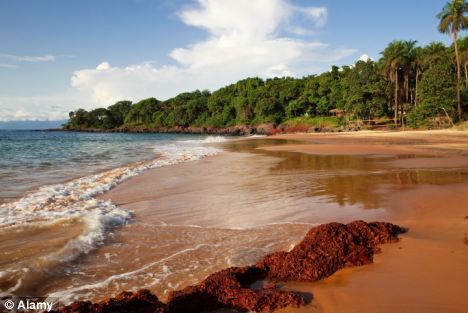 
The office is funded by a structure called
Windrush Ventures, into which much of his estimated £7 million-a-year income is
funnelled. This income is derived from his commercial consultancy, Tony Blair
Associates, the JP Morgan consultancy, another job with the Swiss insurer Zurich
Financial Services and speaking engagements that can earn him six-figure
payments.

The AGI is registered as a charity, as is his
Faith Foundation and Sports Foundation. However, last year the AGI was
reprimanded by the Charities Commission for asking supporters to back Labour in
the Election.

The former PM divides his time between the
charities and his diplomatic role as Middle East peace envoy for the 'Quartet'
of the UN, Russia, America and the EU.

Critics argue that much of his charitable work
helps him to establish key political and commercial contacts around the world.


Nick Thompson, the chief operating officer of
AGI, previously headed the climate change unit at the Department for
Business.

Paul Skidmore, AGI's director of strategy and
fundraising, is a former adviser to David Miliband; Andrew Ratcliffe, one of its
project leaders, was in Mr Blair's Downing Street Strategy Unit, while Malte
Gerhold, who is a project leader for AGI in Sierra Leone, worked in his Delivery
Unit.

Sierra Leone illustrates how Mr Blair could be
open to claims that his business and governmental links could lead to a conflict
of interest.

The AGI is working to end the nation's
dependence on aid, and has helped the government there to push through reforms,
including fast-track commercial courts and easier financing from banks to small
businesses.

Meanwhile, JP Morgan has business interests in
the country, including a stake in mining company Titanium Resources
Group.

However, Mr Blair's spokesman insisted: 'Mr
Blair does not do business in any of the countries that AGI operates
in.'

Mr Blair's AGI has come under fire from some
quarters for advising Rwandan leader Paul Kagame, who has been accused of
running a repressive regime. He has also advised Liberian President Ellen
Johnson Sirleaf on how to copy his style of running a government with a 'strong
centre'.

Mr Blair has already passed the first hurdle,
which had the 51 applicants whittled down to 41. These will be reduced to 'about
a dozen' who will be eligible to bid for future DfIF contracts.

Email to a friend