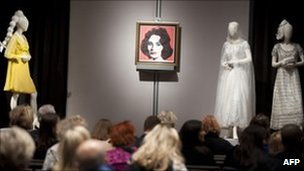 A
four-day New York auction of the belongings of Hollywood star Elizabeth
Taylor has fetched more than $150m, with one leather-bound film script
selling for 50 times its estimate.

The late actor's script of The National Velvet, her first big film, sold for $170,000 at the Christie's auction.

The star of Cleopatra died in Los Angeles in March at the age of 79.

Christie's chairman Marc Porter described the response to the
sale as "nothing short of overwhelming with multiple bidders competing
for every lot".

Part of the proceeds will go to The Elizabeth Taylor Aids Foundation, which she established in 1991. 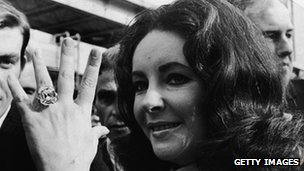 Dame Elizabeth Taylor was known for her love of diamonds


The "Collection of Elizabeth Taylor" auction concluded on
Friday night after four days of sales of jewellery, haute couture,
furniture and memorabilia.

An online-only auction of some 1,000 items from the actress's estate finishes later on Saturday.

The Hollywood legend was renowned for her love of diamonds
and emeralds - and received many as gifts from her twice husband Richard
Burton.

More on This Story