Britain at risk of Recession

Britain at risk of Recession

f the think-tank is right, there will be plenty more opportunities to pick up some sale bargains in 2012

Britain's economy is facing a "bleak" new year, with a real risk of returning to recession during 2012, a think tank is warning.


The only good news for consumers is an expected fall in inflation,
which will ease the squeeze on spending power in those households which
remain in work, says the centre-left Institute for Public Policy Research.


With no solution yet found for the eurozone crisis and many European
economies already back in recession, the risk is that a mood of
austerity will stunt the UK's growth too, the institute's chief
economist Tony Dolphin says in a New Year message.

Going into 2012, the risk is that talk of austerity at
home and crisis in Europe will dampen spirits to such an extent that the
economy drifts into recession.


"As we enter 2012, it seems the word that best describes the outlook for the UK economy is 'bleak'," said Mr Dolphin.


"The eurozone crisis is unresolved and country after country is being
forced to adopt extreme austerity measures that will result in large
falls in output.


As a result, the whole eurozone economy is believed to be back in a mild recession.


"Going into 2012, the risk is that talk of austerity at home and
crisis in Europe will dampen spirits to such an extent that the economy
drifts into recession."

The IPPR believes more should be done to boost the economy

In the case of a double-dip recession, a return to growth will be
possible only with a boost in public spending, a substantial increase in
demand for British goods and services from overseas, or if UK consumers
and businesses are given a reason to spend more, he adds.


"The first is not going to happen, the second is extremely unlikely,
and so we are left with the third," he said. "But with no prospect of
tax cuts or lower interest rates, it is not clear what, in the short
term, the catalyst for more spending by the private sector will be."


The IPPR is calling on the Government to do more to boost the
economy, including bringing forward the establishment of a National
Investment bank to have it up and running by the end of 2012.

This News might help and China will rule the World eventually..... 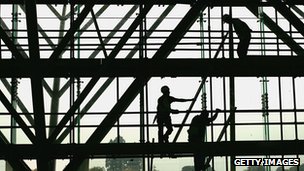 China Investment Corporation (CIC), is keen to invest in infrastructure development in the UK and other developed countries.

Lou Jiwei, the head of CIC, wrote in the Financial Times that the fund was looking to participate in public-private-partnerships in the UK.

The British government has been seeking to upgrade infrastructure in a bid to boost growth.

"CIC believes that such an investment, guided by commercial
principles, offers the chance of a "win-win" solution for all," Mr Lou
said.

Boosting demand
There have been concerns about a global slowdown in the wake
of the ongoing debt crisis in Europe and a low growth rate in the US as
it struggles with a stubbornly high rate of unemployment.

Mr Lou said that as these issues continued to hamper growth,
developed economies needed to increase their spending on infrastructure
in order to boost demand.


Mr Lou's comments in the FT may sound particularly topical in
today's context of shrinking global economic forecasts. But in fact,
China's sovereign wealth fund has been recommending infrastructure
investments for quite some time.

Last year, Zhou Yuan, the fund's debonair head of asset
allocation, told me in New York that the US should spend at least $1tn
over the next few years on improving its creaky transport links, in
order to create half a million high-salary jobs. Mr Zhou even offered to
invest.

This proposal is clearly unacceptable to the US lawmakers in
the current political climate. It seems the UK is much more amenable.


He added that authorities needed
to attract investment in the sector by reducing taxes and offering bank
loans at discounted rates.

"These measures will generate demand for equipment
manufacturing, put more people on the payroll and cut back on
unemployment benefit spending," Mr Lou said.

Mr Lou called upon the British government to encourage
public-private partnership in a bid to achieve development in the
sector, saying such collaboration will help reduce risks.

He added that China was willing to work with local firms and businesses to ensure the best results.

"Local knowledge is essential. Foreign investors without the expertise cannot lead a project," he said.

However, Mr Lou said that Beijing was keen to play a bigger role than it had previously done.

"Chinese involvement has traditionally been in the fourth. Now we also see a need to get involved in the other three," he added.

THEY ARE SAYING THAT COMPANIES HEAVY BORROWING WILL SHORTLY CAUSE ANOTHER DEBT CRISIS AND RECESSION.

What the elitist business community, the anti-brexit groups and the media which support them really mean is that: Over pricing, Excess profits, Increased business rates to councils, Inflated government taxes and Payouts to shareholders will cause yet another recession and culling of staff numbers....

And Britain's gullible public will believe them... again.

I AM THINKING THAT IT MAY BE DEBT ITSELF THAT IS THE PROBLEM WITH ANY ECONOMY IN THAT AS DEBT INCREASES OR INTEREST RATES RISES,SO INDEBTINESS LEADS TO RECESSION.

BUMP BECAUSE OF WHAT I WROTE ON OTHER THREAD