As if Spain hasn't had enough to cope with, unemployment at record levels, austerity measures leading to protest marches, forest fires and now this............I do feel sorry for the people . 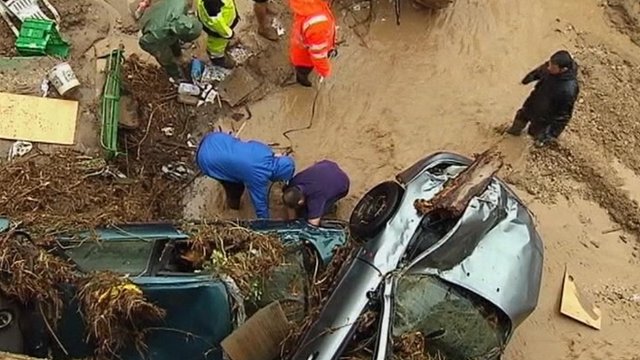 Among the victims were an elderly woman and a young girl.

The strength of the floods overturned cars, closed roads, damaged homes and forced hundreds to leave their properties.

The hardest hit areas were the provinces of Malaga and Almeria, and the Murcia region.

At least 600 people had to be evacuated from their homes in the Andalucia region, which contains Malaga and Almeria, officials said.

Some 24.5 cm (9.6 in) of rain fell on Friday morning alone, according to Spain's weather agency.

A regional government spokesperson in Malaga told AFP news agency the rains were decreasing and seemed to be shifting towards Granada and Almeria.

However, torrential rain and violent thunderstorms are predicted to continue in the south of the country over the weekend.

The deaths of five adults and a child have been confirmed:

Caroline Zartash-Lloyd, who runs a small hotel in Alora, told BBC News that her neighbours had lost livestock, including pigs, hens, horses and donkeys, which could be seen floating in the flood waters.

Local people would be hit particularly hard, she suggested, because it was a poor part of Spain with unemployment of 30% and few people could afford insurance.

"Cars were washed away and we lost a large bridge in Alora and another sizeable bridge in [the village of] El Valle de Abadeljais," she said.

"The farmland was completely washed away, just after the farmers had stopped ploughing. Thankfully they had not started seeding. Many people have been left without electricity or phone lines."

Ms Zartash-Lloyd praised the local authorities for their response to the crisis.

The heavy rains in parts of the south follow months of drought and high temperatures across Spain which triggered dozens of wildfires.

So Sorry for the people of Spain. Just seem to be having everything thrown at them. I really wish them better times to come.

Krisy22 wrote:So Sorry for the people of Spain. Just seem to be having everything thrown at them. I really wish them better times to come.

Yes Krisy22.........I was only the other day talking to the Owner of a Stationer's who had just returned from Spain. He said the unemployment rate for the over 20's is 50% and teenagers 25%. With these climate changes causing such damage, Tourism next year will be affected. How much more can these people take?


Children are among the dead as southern Spain is hit by torrential rain, with a British woman feared missing.


At least ten people have been killed and hundreds evacuated from their homes after flash floods swept through southern Spain.

After months of drought, torrential rain has flooded streets and homes, brought down a motorway bridge, and swept cars down roads that have been turned into rivers.

The hardest hit areas are the Mediterranean provinces of Malaga in the south and Murcia and Almeria in the southeast.

Regional officials said nine people have died and at least 600 people have been moved from their homes.

Among the dead are a young boy and a girl who were found drowned in a car in the southeastern town of Puerto Lumbreras, according to Spanish National radio.

The body of a woman in the town of Lorca, which was badly damaged by an earthquake last year, has also been discovered.

Flooding has hit southern parts of Spain
A 52-year-old British woman is reportedly among those feared missing in Almeria.

A regional government spokesman said: "In Malaga province, there are 800 staff working to return things to normal as quickly as possible. The rains are decreasing and seem to be shifting towards Granada and Almeri."

Up to 245 litres (65 gallons) of water per square metre (11 square feet) fell in the area on Friday morning alone, Spain's weather agency reported.

A flight was diverted to Seville as it headed to Malaga, which lies east of the resort city of Marbella on the Costa del Sol, the airports authority said.

At least two motorways have been closed and some public transport disrupted, officials said.

The flooding comes after months of virtual drought and soaring summer temperatures all over Spain that triggered thousands of wildfires.

Meanwhile, a tornado swept through a fair ground in the main square of Gandia in Valencia, in eastern Spain, on Friday night, knocking down a ferris wheel and injuring 35 workers.

Some 15 of the injured were seriously hurt. The storm damaged several rides and cut electricity to the site, which was closed at the time.

I think Valencia is one of the Spanish Provinces which is autonamous and it's Banks looking for a bail-out from the ESM.

The cost of this flooding, not just in lives , but repair and renewal will be astronomical for an already impoverished area.


Ten people die in flash floods in southern Spain, a British woman is missing and dozens are hurt after a tornado hits a fair.

Video: Some 35 people were injured in Valencia as a tornado hit a fairground
Enlarge