How many wmd's in Iran i wonder now.

Europe the Centre of Democracy Destroyed by
Deviants and Corruption 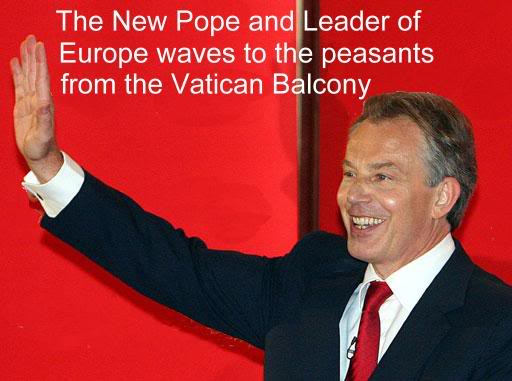 Today The Middle East.. Tomorrow Europe.. Then.. THE WORLD IS MINE !!!

Lioned wrote:Please God give me the strength to carry on during these darkest of days


How many wmd's in Iran i wonder now.

Oh please, do not mention that bloody Bilderburg...my son talks about it all endlessly...that is if he can find me, I tend to go into hiding

Edit, please please do not tell me we are going to see that idiot Blair's cheesy grin all the time again...I can't stand it

FFS Its going to be bad enough seeing Blairs stupid grining smug face with the £ and €'s in his eyes, its that stupid bitch of a wife of his we are going to have to put up with :shock:

Quote
Downing Street has denied reports that Gordon Brown is helping lobby for Tony Blair to become European president.
The ex-PM has not confirmed he wants the job, which will only exist when the EU Treaty is ratified by all 27 states.
Mr Brown's spokesman said officials had "not been asked to go and lobby for Tony Blair's candidacy". Unquote

Our dear, benevolent, genial and trusted Prime Minister, the Rt Honourable Member, Mr Gordon Brown is seemingly slipping back into his standard operational mode and has started telling his world renowned porkie pies again... or did he ever stop?

What a disgusting parody of our once respected Labour Party this farcical drooling bully has created. His unelected tenure continues to run this nation fuelled on cheap lies, speculation, theft from the public purse and temper tantrums.

Any decisions taken by this unelected tunnel visioned spiv should be reversed by an incoming government, whatever their political philosophy. Neither he nor the party he purports to lead are fit for purpose.

The country needs to see the back of these New Labour Liars if it is ever to climb out of this bottomless recession Brown the spiv has taken it.

Barrossa and co have just been on BBC news 24 pluging the Lisbon Treaty.


Not only do these high movers support the most hated politician in Europe, they've eaten Bambi!!!!!!

Laffin Assasin wrote:Barrossa and co have just been on BBC news 24 pluging the Lisbon Treaty.

And Gordon Brown was on tv last night confirming his support of Blair for the Presidency.

Described him as a world statesman.

There were also a couple of tossers on Question Time telling us how marvellous he would be. And one MP from Plaid Cymru who said he would be deeply ashamed if Tony Bliar were to get that job, and it would be a disgrace. And I agree with him (the PC man) 100%.

And another step closer to England joining the Euro,imo.

The Blair Delusion
Splashed across the opinion pages of Britain’s lower-circulation, loss making newspapers the punditocracy claims Blair is The Only Man for this Job. Steve Richards, Oliver Kamm, Jackie Ashley, Matthew d’Ancona (“the former PM is certainly the best candidate available”), John Rentoul “Yes, Oui, Ja“, and most of the rest of the Islington chattering classes are agreed: Blair should be president.

For a reality check let Guido quote the Süddeutsche Zeitung

The chances of former British Prime Minister Tony Blair going to the post of President of the European Council’s are zero… At the meeting of Socialist leaders before the start of the EU summit, British Prime Minister Gordon Brown was not listened to in his plea in favour of his predecessor… Thus Blair is in fact out of the race, because for this task no one wants to trust him.
Also overlooked by our somewhat delusional and europhile media elite is one glaring inconvenient fact; centre-right parties are politically dominant in Europe currently, the President is likely to come from their ranks.

Yesterday Brown fibbed in Brussels that “People would be pleased if a British person became president. I think most people would prefer a British person taking this job rather than citizens of other countries.” Polls show that less than a third of Britons support ‘President Blair’. Brown has perhaps the worst case of delusion, out of touch with the will of his own people. Guido knew that Blair would definitely not get the job once Brown cursed threw his backing behind him…

Laffin Assasin wrote: Guido knew that Blair would definitely not get the job once Brown cursed threw his backing behind him…

Maybe that is why Brown was so fulsome in endorsing Blair. Revenge for not stepping aside and letting Brown in sooner.

Can it be possible that brown has actually done something useful ? even by default i am still not sure i can believe that !!