Is Brown a Mason?

Is Brown a Mason?

I was just browsing the net, as you do and came across this site.......
I know the Masons theory has been done before on 3As but I hadn't seen this site. So feel free to delete, mods. 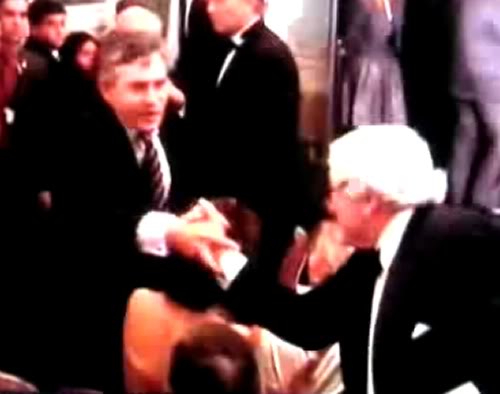 Referring to my Texe Marrs' Codex Magica this handshake is a Ma-Ma-Bone or Real Grip Of A Master Mason.

The person receiving the grip from Prime Minister Gordon Brown is Mervyn King, Governor of the Bank of England.

This partnership makes sense when you think about how Brown sold 60% of the UK's gold reserve between 1999 and 2002 when the price of gold was $275 an ounce, the lowest it had been for 20 years. Prices went on to reach $700 an ounce in May 2006, had Brown waited, he would have raised £4bn for the public. He presumed the IMF would follow suit, but it resisted.

According to the Daily Mails article on Browns family tree, His name is in fact James Brown and the name Gordon was taken from his Uncles first name, who the Daily Mail confirms as a Freemason here.

The website says, "Jessie was only 11 when he died, aged 48, in 1929, and from then the firm was run by her very capable and much-respected elder brother Gordon, who was also a Freemason."

With this new evidence on Gordon Browns Freemasonic background, the theories I put forward in the Sarah Payne article, suggesting that Gerry McCann received help from Gordon Brown as they were both members of the same Freemasonic lodge seems even more likely. To further support this, I recently learnt that the McCann’s spokes person was the very same spokes person for Gordon Brown himself!
Clarence Mitchells (the McCann’s spokesperson) profile on the BBC website as of last month had a entire chapter on his work as Gordon Browns spokesperson, now it no longer does.

yep....so is g mccann....they used the masonic room for their meeting with the other tapas

Remember the 'momento' that was left when g mccann came back to the uk for the first time.....now...how many people can say if they lost their child they would get ONE OFF THOSE from a mason!