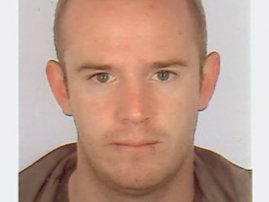 Gardaí have issued an appeal for information on the whereabouts of a 26-year-old Co Wicklow man who has been missing for three days.

Stephen O'Meara was last seen in Wicklow Town at around 6pm Thursday evening.

He is 6'2" in height, of athletic build, and has sandy, receding hair.

AdvertisementWhen last seen he was wearing black Manchester United tracksuit bottoms, a dark grey tracksuit top, and a white or navy Nike t-shirt with a red line across the chest. He was also wearing black and white Nike Air Max runners and a thick gold chain.

Gardaí say they are very concerned for his safety.

Gardaí have identified the body of a man found in a shallow grave in Co Wicklow on Christmas Eve as that of 26-year-old Stephen O'Meara.

Mr O'Meara, who was from Wicklow, had been missing since August.

A post mortem examination has been carried out on the body but gardaí say they are not releasing the results.

A man in his 20s, who was arrested earlier this week, remains in garda custody.

THE heartbroken mother of the man found in a shallow grave on Christmas Eve said she walked just yards from where her son's body was found during previous searches for him.

Father-of-three Stephen O'Meara (26), from the Rosehill estate in Wicklow, was found in a wooded area at Ballydonnell, near Red Cross, in the county.

He had been missing since August 6, when he went out to meet someone after telling his partner, Catherine Green, he would be back shortly.

Last night, Veronica O'Meara, Stephen's mother, said she had not yet been told the exact cause of death.

Stephen's body was transferred to Loughlinstown Hospital in Dublin yesterday where a post-mortem was due to be carried out later today.

It is feared that he may have been buried since he went missing, which could make establishing the cause of death more difficult than usual.

Gardai carried out technical examinations at the scene yesterday. The discovery of Stephen's body follows the arrest on Monday of a man in his 20s in connection with the investigation.

It is understood that he was still being held in Wicklow station last night and he can be detained for up to a week.

"It's just surreal," Veronica O'Meara told the Irish Independent. "It's horrible. We're all devastated. The worst is telling the children; the oldest child is five and the others are three and one.

"He was in a place in the woods where we have been lots of times. We were just a few yards from him."

"We had 1pc hope that he was alive," she added. "We were prepared for the worst but you always have a faint hope.

"We don't have a clue why someone would do this to anybody. Stephen had his problems down the years, but nothing that deserved this."

Stephen was born 10 years after the couple's four other children into a close family. His father said Stephen cared deeply about his three children -- aged five, two and one -- and had been with his partner since his school debs ball.

But he added that Stephen was a "mixed-up kid" in the past and he had not worked in three years after having a number of jobs.