Estelle Mouzin, aged 9, disappeared on her way home from school on Thursday 9th January, 2003. There have been numerous false leads, including an image taken from a child pornography site, which was not Estelle. The serial killer Michel Fourniret was under investigation for Estelle's disappearance, but he appeared to have an alibi as he stated that he was at his home and on the telephone to his son at the time Estelle disappeared. Phone records showed the call, but of course not who made it. 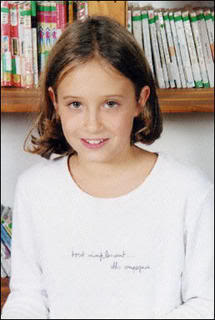 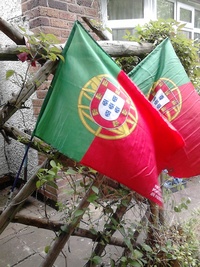 Although there is an age-advanced image of Estelle now, her parents have issued an appeal to her abductor to let them know where Estelle's body is so that they can lay her to rest.

On the latest message, this is the link for the poster appeal: 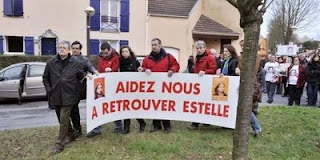 Family and friends marched in silent tribute to Estelle, who has been missing for eight years.

A hundred or so people got together this Saturday, January 8th, at the Place du Temps Perdu in Germantes (Seine-et-Marne) as a tribute to little Estelle, who disappeared eight years ago. "She would have been in my class and taken her bac this year," Laetitia, her best childhood friend, recounted in a trembling voice. Her eyes moist, the teenager confided: "The hardest part is going back to the place where she disappeared without knowing if I will ever see her again."

It's Eric Mouzin, Estelle's father, who leads off the silent march with his other two children, Arthur and Lucie, at his side. With heads lowered and averted gaze, the family carry the banner, "Help us to find her." Traumatised by her daughter's disappearance, Estelle's mother, who moved to South Africa several years ago, is not present. The rest of the procession is made up of family friends and relatives, residents of the village, children and friends.

"When we were kids, we loved to shut ourselves away in Estelle's shed, where we would play for hours," remembers Keiran, a childhood friend. The young man describes, "a lively, happy and creative child." "Even if she was upset by her parents' divorce, she would never have run away," he adds. Members of Estelle's family, her father in particular, have always refused to accept the runaway theory.

Eric Mouzin, a reserved man of few words, calmly lists, "the failings of the legal system and the weaknesses of the investigation which never turned up anything concrete." For a long time accused in the disappearance of his daughter, he continues to protest his innocence, notably in a book, "Retrouver Estelle." And he repeats his aim, "to fight to the end to find the truth."

Shortly before 5pm, the march reaches its destination and the procession reassembles around a Japanese cherry tree, planted at the place where the little girl was seen by a friend for the very last time. "I hope she'll be with us next year," confides Estelle's Godfather. Then, the piece of music written specially for Estelle starts up. Everyone is quiet. A bouquet of flowers is laid and the crowd begins to disperse.

http://www.lepoint.fr/societe/huit-ans-apres-la-disparition-d-estelle-mouzin-le-pere-raconte-son-combat-04-01-2011-126548_23.php
Google translate
Eight years after the death of Estelle Mouzin, the father tells his fight

Eight years after the death of Estelle Mouzin Guermantes in Seine-et-Marne, his father, Eric Mouzin, is launching a "Call the abductor" in a book to be published Wednesday in the hope "that the investigation will lead" finally . Find Estelle * begins with this sentence: "I'm not the one who removed Estelle." Eric Mouzin says will "erase the period of suspicion of the investigators" and "stupid comments that followed the release of the sketch," it was like. The girl disappeared on the way home from school. She was nine years old. "Soon, Estelle has spent more time living than extinct," says his father bitterly. "I wanted to, with this book, make people aware of the difficulties faced by families of missing children," that "lessons learned are useful to the greatest number," said Eric Mouzin.

With this book, Eric Mouzin think "have gone a step" because "we certainly approach the stage where we will know if the investigation will succeed or not," he says. The father of 54, which says "fighting for 8 years so we continue to seek the truth", also wants "the survey serve to improve the devices' research. "We welcomed the plan but there Removal Alert needs to be improved" and "call for the creation of a fighter better known to the general public than those that currently exist," said Eric Mouzin. At the end of the book, "attached", Eric Mouzin launching a "Call to the captor." "I try to use every means to lead the investigation" and "if this book gives us the tracks, the goal will be doubly filled," says Eric Mouzin.

Last May, the lawyer for the family of Estelle asked the court to appraise three sealed pieces of white laces and black gloves, provided by the Belgian authorities after the arrest of Fourniret, sentenced in May September 2008 to life imprisonment for murder of young girls between 1987 and 2001. On the day of his death, January 9, 2003, Estelle Mouzin wore white boots with double laces, also white, and black gloves are mentioned on inquiry notice of the girl. Asked after his arrest in June 2003, following an attempted abduction, Fourniret had assured to be in Belgium on the day of the death of Estelle.

"Right now, we do not schedule items that have been requested", "time can not continue to spin like that because every month that passes complicates the operation of elements that could be extensive," Eric Mouzin regrets. He explained, however, not wanting to "teach" and "not be in the idea of ​​settling of accounts" with this book.

In January 2010, police launched a fresh appeal for witnesses together with a photo of the girl, aged in a teenager. This had resulted in any conclusive track. As every year in memory of the young disappeared, a public meeting organized by the Estelle, followed by a march will be held Saturday at Guermantes (Seine-et-Marne), from 14 hours to space Marcel-Proust.