Gardaí are trying to establish if a body washed up on a Co Clare beach this morning is that of a missing woman.


The discovery, which was made on Fanore Beach near Ballyvaughan, is being treated as suspicious.

It comes three days after a 43-year-old local woman disappeared.

Deirdre McCarthy had been last seen after returning to her home in Ballyvaughan after a night out on Sunday night.

Family members raised the alarm when she failed to turn up for an appointment on Monday morning.

Up to 50 local people, gardaí and local search and rescue teams have been involved in a search for Deirdre McCarthy.

Gardaí sought the assistance of the Garda Technical Bureau to assist them in their investigations.

Gardaí investigating the death of a woman whose body which was found at Fanore beach in Co Clare yesterday have confirmed she died a violent death.

Gardaí say that while they have not specifically launched a murder investigation, they are treating it with the same seriousness as murder.

The body has been formally identified as 43-year-old Deirdre McCarthy who had been missing from her home in Ballyvaughan since late last Sunday night.

While the body was found on Fanore Strand, Gardaí believe that her body was put into the water at another location.

They have made a number of appeals for information about sightings of Ms McCarthy since she was last seen before midnight on Sunday and the time she was noticed missing on Monday morning.

They believe people may have seen something suspicious at or near her home early last Monday morning.

Her home has been technically examined by Gardaí as well as two cars they believe may have been involved in her disappearance.

Gardaí are in particular appealing to anyone who noticed any suspicious activity or movements at or in the vicinity of Turlough House, or on the roads in and out of Ballyvaughan, Lisdoonvarna, or Kilfanora, between 11.30pm on Sunday and 7am on Monday, to contact them. 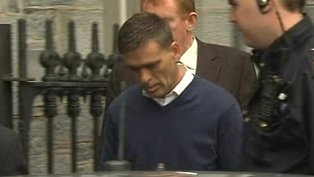 A 39-year-old married father of two has appeared in court in Ennis, Co Clare, charged with the murder of 43-year-old Deirdre McCarthy.

Colm Deely of School Road, Ballyvaughan, Co Clare, was charged with the murder of Ms McCarthy at a place unknown in Co Clare on or around 28 March 2011.

The court was told he is a married man with two young children who was on a part-time FÁS course three days a week and was not a man of means. An application was made for free legal aid.

Judge Joseph Mangan remanded him in custody to appear at Ennistymon District Court sitting at Kilrush next Wednesday.