Alexander and Christopher Watkins were abducted by their non-custodial mother, Edyta ( Ustaszewski ) Watkins and are believed to be in Europe, Edyta is from Poland. 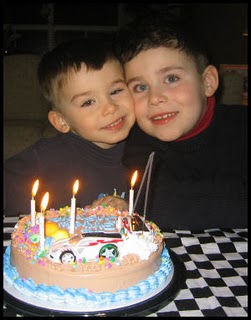 Edyta ( Ustaszewski ) Watkins has a history of fleeing, not complying with Police, not complying with Court Orders, using FORGED or OLD Court Forms, not providing her accurate address information or contact information to authorities even by direct Orders of a Court Judge. Edyta, also known as ALEXANDRA WATKINS in the acting world, is a Unionized Actresss who works in TV / FILM / COMMERCIALS and is registered with ACTRA Canadaa. She uses her acting, emotions and excellent verbal skills to verbally manipulate people to support her cause. She is extremely smart, articulate in speech and a very good debater.


Alexander and Christopher have been living with their father Stephen since December 2007, after the Catholic Children’s Aid Society of Toronto apprehended the children over concerns of mental / physical abuse by Edyta and both her parents. The Honorable Justice H. Brownstonee of the Ontario Family Courts ruled that the CCASS had the authority to place the children with Stephen as he already had a Joint-Custody Agreement enforced as of February 16th, 2006.


On Friday March 6th 2009, Edyta ( Ustaszewski ) WATKINS father, Tadeusz ( TED ) Ustaszewski, was confirmed by the school to be alone when he picked-up the children from their school and daycare to have a weekend access with their mother.
On Monday March 9th 2009, Stephen WATKINS advised York Regional Police that Edyta WATKINS or her father, Tadeusz ( Ted ) USTASZEWSKI had not returned the two children after her scheduled Court Ordered weekend access visit. The children’s school called and advised Stephen WATKINS that Alexander WATKINS and Christopher WATKINS were not dropped off in the morning.
Stephen WATKINS advised York Regional Police that he feared Edyta WATKINS would attempt to abduct the children, as she had not turned in their Canadian Passports as required by a previous Court Order issued on November 21, 2007 and that Edyta WATKINS had family living in Chicago, USA, in Torun, Poland and in Warsaw, Poland.
Durham Regional Police were requested to attend Edyta WATKINS residence and found no one home.
York Regional Police spoke with Edyta WATKINS father, Tadeusz ( Ted ) USTASZEWSKI who was able to confirm that he had dropped his daughter and the two children off in Niagara Falls, New York on Sunday March 8th 2009 some time before 12:00pm (noon).
Canada Border Services Agency was able to advise York Regional Police that Tadeusz ( Ted ) USTASZEWSKI returned to Canada alone at approximately 4:15 pm the same day.
On March 10th 2009, the US Department of Homeland Security advised York Regional Police that they had confirmed that Edyta ( Ustaszewski ) WATKINS and the children Alexander WATKINS and Christopher WATKINS had left on Northwestern Flight 52 from Detroit via Rochester, NY, USA to Frankfurt, Germany on Sunday March 8th, 2009.
Edyta ( Ustaszewski ) WATKINS left Canada and entered the United States and then traveled through German Customs in Frankfurt, Germany on a Canadian Passport that the Family Responsibility Office (FRO) in Ontario claims and reported verified was “suspended” on January 26th 2009 (Suspension of Federal Licenses), 42 days prior to the abduction on March 8th, 2009 as a Provincial Enforcement Measure by the Province of Ontario for lack of child support payments.
Based on the above information, York Regional Police in Ontario, Canada believe that this was a planned abduction and requested that a Warrant in the First be issued for Edyta ( Ustaszewski ) WATKINS for committing the offence of Abduction in Contravention of a Custody Order, contrary to Section 282 of the Canadian Criminal Code.


Members of her extended family who reside in Chicago have confirmed that Edyta, Alexander and Christopher are now in Poland where Edyta was born and still has family although they may have also traveled or relocated in the countries of Germany and Austria.


Alexander speaks fluent Polish / English and has short straight hair. He has a small round scar on the left side of his neck. Alexander was issued a Polish Passport. Diagnosed with High Function Autistic Spectrum Disorder, Problems with eye-to-eye contact, Anger management problems, Constantly moves and fidgets, Low self esteem, Problems expressing emotions (Hugs people without warning), Plays with water, Has obsessive compulsive traits, Loves balls and small round objects, Likes using the computer, Likes to tell jokes, Emotionally attaches himself to people he trusts.


Christopher speaks English / Some Polish and has short straight hair. Christopher may have been issued an unauthorized Polish Passport. Easy going child, Loves to climb, use the computer, read books and hand held video games "Pixter" and "V-Smile". Problems saying some words like "YELLOW" sounds like "LELLOW, Loves affection, Will copy mannerisms that his brother displays, Puts his boots on backwards, Cannot do his zipper on his jacket, Chews his nails, Good sense of fine motor skills.