A Newmarket, Ontario father, Stephen Watkins, has been searching for his missing children abducted to Europe for 7 months for his two abducted missing children, Alexander & Christopher Watkins in this incredible and sad International Parental Child Abduction story from Canada. 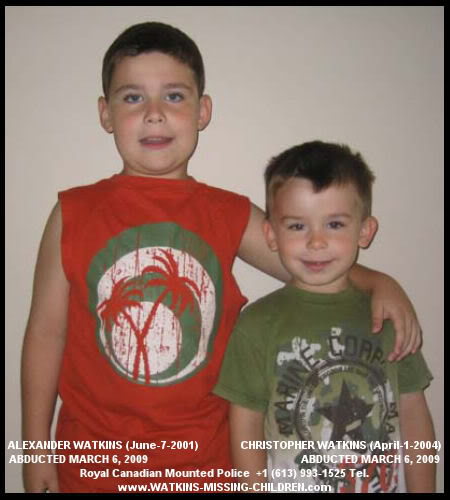 The biological father, Stephen Watkins, was awarded Final Sole Custody of the children by the Canadian Courts on January 26, 2009 after the children were apprehended by the Catholic Children Aid Society of Toronto (CCAS) on November 2007 over mental / physical abuse caused by the children's mother. The boys were placed in the Sole Custody Care of Stephen Watkins by the CCAS and Courts in December 2007 as he already had a Joint Custody Order issued on February 16, 2006.

A few weeks after the January 26th Court Ruling , Alexander WATKINS (7 yrs) and Christopher WATKINS (4 yrs) were abducted by Edyta Ustaszewski Watkins (non-custodial mother) and her father, Tadeusz Ustaszewski, during the weekend of March 6 2009, on a Court Ordered weekend access.

The adult passport was confirmed suspended 42 days prior to the abduction by Ontario's Family Responsibility Office (FRO) due to Provincial Enforcement Actions.

The father is SEEKING HELP FROM THE PUBLIC to locate these children who have been abducted from CANADA to EUROPE and possibly to the country of Poland.

York Regional Police may believe that the children may be taken into Poland where the mother was originally born although this has not been confirmed.

York Regional Police has issued a Canada-wide Arrest Warrant and the Ontario / Canadian Government has issued a RED NOTICE on Interpol for the world wide apprehension of Edyta (Ustaszewski) Watkins.

Both children have been flagged on Interpol with world wide YELLOW NOTICES for information on their whereabouts.

Alexander WATKINS and Christopher WATKINS have still not been located and are ABDUCTED / MISSING CHILDREN in Poland, Germany or Austria and Europe.

If seen, immediately call your local Emergency Telephone Number (i.e. # 9-9-7 in Poland) and contact either to the Royal Canadian Mounted Police (RCMP) at mcr.nps@bellnet.ca (RCMP2009247848) in Canada or INTERPOL

Thank you for REPOSTING my Missing Abducted Children on other sites so that they may be found.