New Zealand have just won the World Cup by the narrowest of margins again but after 24 years you can imagine the jubilation. The
New Zealanders had prepared everything . Sorry, Iv"e got the sniffles again, a Songstress singing "Now is the Hour", half the Players in tears.
As I was saying all the Roads will be closed tomorrow for the Parade of the Team, all the schools will be closed, Well done NZ

I'm glad about that.Dont want them froggies winning,though they made a good game of it has to be said.

New Zealand has had a tough year what with the Earthquake and now the Oil slick, it"s a great tonic for the population to win the Cup.

Thousands turn out for victory parade in Auckland 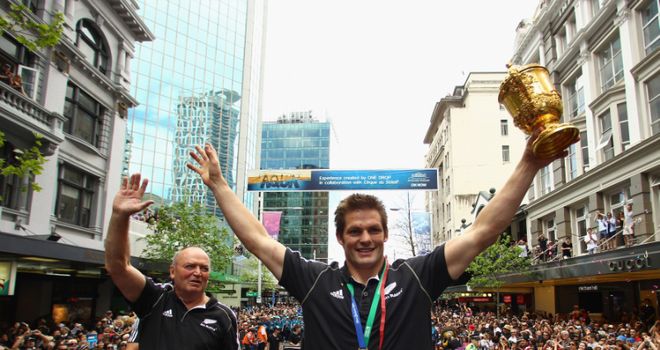 Tens of thousands of people flocked onto the streets of downtown Auckland on Monday to celebrate New Zealand's World Cup victory over France.
There was a sense of relief at Eden Park on Sunday after the All Blacks earned an 8-7 win against a spirited French side to lift the Webb Ellis trophy and finally end a 24-year victory drought.
And there was arguably also a collective hangover among the capital's rugby-following population on Monday, which is a public holiday in New Zealand. Thousands of fans gathered early for the parade, mixing with stragglers making their way home from late-night celebrations.
Crowds were banked 20-deep in places along the parade's route in central Auckland as the procession kicked off at 2:30 p.m. local time (0130 GMT) with players, coaches and support staff ferried along city streets in a convoy of open-topped vehicles.
"This is very special. I can't believe how many people are out here...this is just awesome," All Blacks fly-half Daniel Carter, whose tournament finished early with a torn groin tendon, told local television from the back of the first car.
Great day

The reception, the largest the country has seen since Team New Zealand's 'Black Magic' won yachting's America's Cup in 1995, was carried by both national television networks and left the players amazed by the turn-out.
"It's a great day. It's so fantastic. Just shows how much it means to everyone in New Zealand and it's great to be part of it," said scrum-half Andy Ellis, who kicked the ball into touch to end Sunday's final and a generation of frustration.
Captain Richie McCaw and coach Graham Henry paraded the Webb Ellis trophy in the final car alongside veterans Brad Thorn, Mils Muliaina and assistant coach Wayne Smith, all of whom have now ended their international careers.
The team will be feted in further parades this week. New Zealand's second largest city, Christchurch, which lost the right to host seven World Cup games after a devastating earthquake in February, will hail them on Tuesday before they head to Wellington the following day.
"It means everything (to get the support of the people). You dream of this as a little kid and for it to come true is unreal," said fly-half Aaron Cruden, who went off in the final with a knee injury.
"New Zealand, we love you. YES!"