Kate - God and the Devil

Kate - God and the Devil

For Kate McCann, it is, and will always be, about Madeleine. Proceeds from the book, which is already a bestseller on Amazon, will go towards the search. Which, it's clear, will never stop. For her, a front page of The Sun taken up by the words "I couldn't make love to Gerry", and topped by the words "Maddie, by her mum", in deliberate contravention of her stated desire, from the beginning of her ordeal, that journalists could at least respect her daughter by using her full name, is a price worth paying if it helps with the search. So are accounts, extracted in yesterday's Sun, of how she nearly lost her faith.

"There have," she says, "been many times when I've felt God has deserted me, or that He has let Madeleine down... I've shouted out loud and on occasion I've hit things... I do not blame God for Madeleine's abduction. The abductor is responsible for that. What I do wrestle with, though, is the inexplicable fact that despite so many prayers, almost total global awareness and a vast amount of hard work, we still do not have an answer. My aunt quotes a saying: 'Pray as if everything depends on God. Work as if everything depends on you', and I truly believe this is what we've done."

It's hard to read those words without wanting to weep. There can't be a human being on this planet who thinks Kate and Gerry McCann haven't tried hard enough to get their daughter back. There can't be many who think that this quest, launched on that May night in Portugal four years ago, and which will, apparently, continue for the rest of their lives, or until their daughter, or her body, is found, isn't also a curse.

Kate McCann is on a pilgrimage which is also a kind of purgatory. It's like a pilgrimage to Santiago de Compostela where, in hope of greater blessings, and maybe miracles, you shuffle on bruised and bloodied knees. You live in hope, even when you think the hope might kill you, and even when, as she confesses in her book, you sometimes think you might kill yourself. There was a time when you could only do so much. You could pray, and fast, and weep, and wail, and shuffle on knees and whip yourself with chains. But that was before the blessing, and curse, and god, and devil, and heaven and hell, we call the media.

Kate McCann knows all about the media as hell. She knows how this ravening beast, with its 24-hour appetite, and need for fresh meat, even when there isn't any, can chew you up, and spew you up. If she didn't before, she certainly does now. But she has also held fast to the belief in the media as the path to salvation, and the path to a kind of heaven. And for the possibility of this path to heaven, she has come near to selling her soul.

No one who hasn't been through what she has been through can blame her for the choice she has made. Most people would walk on their knees through broken glass, and many would write about their sex life in the pages of Britain's sleaziest red-top, to get a missing child back. Many write about their sex life, or talk about it on TV, when they don't have anything to get back. They do it because they don't think the media is a pathway to anything. They think it is heaven. Until it turns into hell.

Kate McCann's book won't get her daughter back. If it brought her any catharsis to write it, then I'm glad she did. But now that she has, I hope, I really hope, that she can keep away from the god and devil that feeds her hope, and set her soul, and the memory of her beautiful daughter, free. 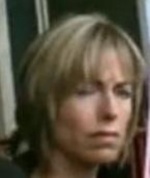 what's this garbage about?

I don't know. I kinda skip read it, picking up words like 'pilgrimage,' and 'bloody knees,' and knew I could not cope with it!

and something about Kate writing about her sex life in order to find Madeleine.

and something about Kate writing about her sex life in order to find Madeleine.

Exactly!! Its media claptrap - something the Leveson Inquiry hasn't covered - yet!!!!