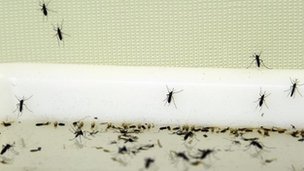 An elderly man has died in Greece in what officials believe to be the country's first case of dengue fever since the 1920s.

The man, in his 80s, died in hospital on 30 August after contracting fever in the western village of Agrinio.

Blood tests are being carrying out to check whether villagers or members of his family also have the viral disease.

Dengue fever is spread particularly by the Asian tiger mosquito which has increasingly been seen in Europe.

The Asian tiger mosquito is also considered the main carrier of West Nile Virus, several cases of which have been reported in Greece this summer.

Although health officials believe the elderly man in western Greece had contracted dengue fever, they are describing it as a probable rather than a definite infection, because of the complications of his case.

There was evidence of West Nile Virus in his blood when he died in hospital in Patras, but the dengue fever was stronger.

He also had an infection and low platelets (thrombocytopenia) - both of them symptoms of the dengue viral disease.

"We are dealing with a disease we haven't seen for several decades," said Dr Sotirios Tsiodras of the Greek Centre for Disease Control and Prevention.

"It might be an isolated case but we want to make sure there are no further cases. We need to take it very seriously," he said.

As well as blood tests, mosquito traps have been set up in Agrinio as part of an entomological investigation.

In 2010, cases of dengue fever were reported in Croatia and France and the spread of viruses by the Asian tiger mosquito in Europe has been linked to travellers and migrants