My note: I have a relative who works 32 hours a week and receives the staggeringly small amount of £11,000.00. p.a. He gets no Tax Credits, Housing Benefit or Council tax benefit because he is single. Mr. Osborne should be made to eat his words - he complains that he had to take a pay cut! The good thing about this is its on You tube and out in the main stream for all to see! We are obviously "not all in this together" after all

George Osborne bought paddock with taxpayer's money
George Osborne received support from the taxpayer to own a horses' paddock, it has emerged. 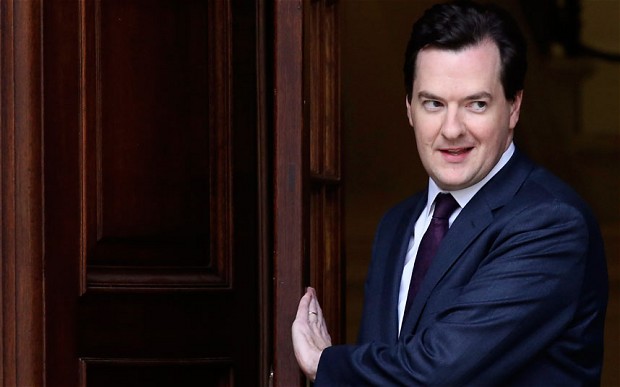 By Rowena Mason, Political Correspondent11:41AM GMT 07 Dec 2012
Mr Osborne bought the extra land along with a country farmhouse in his Cheshire constituency in 2000, before he became an MP. He later claimed up to £100,000 in expenses to cover mortgage interest payments on the land and property at Harrop Fold Farm, near Macclesfield, between 2003 and 2009.
According to Land Registry records obtained by Channel Four's Dispatches, Mr Osborne bought the house and land for £455,000 and sold them last year for up to £1 million - making a sizeable profit.
Sources said Mr Osborne never actually kept a horse on the paddock, which was registered separately to the house.
John Mann, a Labour MP, said Mr Osborne "clearly didn't need [the paddock] to discharge his parliamentary duties", which is what expenses are meant to cover.
The Chancellor's country farmhouse featured in The Daily Telegraph’s expose of MPs’ expenses in 2009 when it emerged that Mr Osborne had “flipped” his second home allowance onto the property and increased the mortgage.
Related Articles
MPs hire lawyer to fight order to repay second home profits 06 Dec 2012
George Osborne cannot duck fresh fuel duty pressure, campaigners say 06 Dec 2012
First pasties and grannies... now the Mummy Tax 06 Dec 2012
Young lives are being ruined because of our timid Treasury 06 Dec 2012
Downing Street complains over Evan Davis's George Osborne interview 06 Dec 2012
Hard times see Chris Hohn’s hedge fund profits slide 07 Dec 2012
He originaly covered the £455,000 purchase by extending the mortgage on his London house. However, he started claiming taxpayer support when he took out a new £450,000 mortgage on the Cheshire property in 2003
Mr Osborne stopped claiming any second home expenses in 2010, when a new allowances regime was introduced in the wake of the scandal, which rocked the House of Commons.
An aide to Mr Osborne told The Daily Mirror that the house and field were "sold as one and had to be bought as one."
The Chancellor yesterday claimed that he had borne his share of financial pain during the recession and national austerity.
Mr Osborne, who earns £134,565 a year, told BBC News: “I took a pay cut, and froze my pay on taking this job, look a pay cut from the previous Chancellor, the Labour Chancellor, in order to show that politicians weren’t going to get away with it."

Can't open his mouth without lying , i'm surprised anyone still believes anything he says .