Baby's astonishing escape after he is run over by train

Baby's astonishing escape after he is run over by train

A six-month-old baby boy has escaped with just a bump on the head after he and his pram were run over by a train.

Astonishing video footage shows the pram rolling off the edge of a station platform before it is struck and run over by the 250-ton vehicle.

The child's mother can be seen making a frantic grab for the buggy as it accelerates towards the track at the suburban railway station in Melbourne. 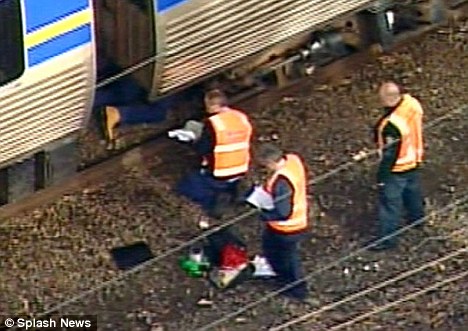 Believing the baby to be dead, rescue workers try to get him out from under the train....

But she is unable to stop it plummeting over the egde and can only watch in horror as her child is apparently crushed by the train and its carriages.
Her frantic, despairing movements, with her hands to her head, left no doubt that she feared her baby had been killed.
Other passengers ran to her help as she cried out in shock.
Yet the baby survived with nothing more than a bump on his head - a survival that senior police and railway officials were describing as 'a miracle'.
Video footage from a security camera - obtained by Melbourne's Herald Sun newspaper - captured the whole incident as the mother, who had been momentarily distracted, made a frantic grab for the three-wheeler pram as it rolled out of her reach


It toppled onto the tracks - and seconds later the 250-ton train came into the station at 30mph, ploughed into the pram and dragged it and the child along underneath the front carriage.
No-one on the platform who saw the incident believed the child had survived.
But when ambulance officers arrived a few minutes later they were astounded to find that not only had the unnamed baby survived - but he was safely back in his relieved mother's arms.
Mr Jon Wright, an intensive care paramedic with Ambulance Victoria, said: 'All he needed, apparently, was a feed and a nap.'
The incident came a few days after the local rail network warned parents to be more vigilant when using the popular three-wheel prams, which roll easily.
'This narrow escape just shows how careful parents have to be,' said Mr Wright.
'Luckily the baby was strapped into his pram at the time, which probably saved his life. I think the child's extremely lucky.'

'This is an amazing escape,' said a police spokeswoman. 'It could have been so much worse.'

The train driver has been offered counselling.

That left me cold! OMG that poor woman!

There is a God!

o my god thats awful... that baby is so lucky to be alive.