Sunday, 31 January 2010 22:20
Gardaí in Dublin are investigating the discovery of human remains in Dublin this afternoon.

The remains were discovered near an area known as the 'Viewing Point' on the Military Road in Rathfarnham by a person out walking at around 2.20pm this afternoon.

The scene has been preserved pending the arrival of a State Pathologist tomorrow morning.

AdvertisementIt is believed the remains were there for some time but gardaí say they cannot say how long.

Examination due on Dublin Mountains body

Monday, 1 February 2010 10:33
State Pathologist Dr Marie Cassidy is due to carry out a preliminary examination on human remains found in the Dublin Mountains yesterday.

The remains were found near Viewing Point on Military Road in Rathfarnham by by a person out walking at around 2.20pm.

The scene has been preserved for technical examination.

AdvertisementA full post mortem examination is also due to be carried out today.

Thanks Antoinette. Keep us updated on this interesting find, please.

Will do. Hopefully some family will get closure on their missing loved one

By Breda Heffernan
Monday February 01 2010
GARDAI last night launched an investigation following the discovery of human remains at an isolated spot in the Dublin Mountains.
The discovery was made by a member of the public who was out walking yesterday afternoon.
It is not yet known how long the remains were at the scene, which is an area known as 'Viewing Point' on the Military Road, running from Rathfarnham to the Wicklow Mountains.
It was also not initially apparent if the body was male or female.
The office of the State Pathologist was notified last night and a post mortem on the remains is due to take place this morning. Once this is completed, garda investigators will have a better understanding of how long the body has lain there and be able to work on identifying it.
The location of the discovery was described as being "out of the way" and a distance from the road.
The area was sealed off to allow for an intensive technical examination. This was temporarily called off as darkness fell last night.
Gardai in Rathfarnham are leading the inquiry and said they were "investigating all the circumstances" of the find.
The area of the Dublin Mountains has been the scene of several gruesome murders in the past, including that of Patricia O'Toole, a south Dublin woman who was brutally beaten and bludgeoned to death in 1991.
Another woman, Patricia Furlong (21), from Dundrum, was abducted, raped and strangled in the mountains in 1982.
Five years later, the body of Antoinette Smith was found by ramblers partially exposed in a shallow grave. She had been missing for nine months and a forensic exam showed she had been raped and strangled.
The area was also the focus of a search following the disappearance of American student, Annie McCarrick in 1993 and that of missing schoolboy Philip Cairns in the 1980s.
Ms McCarrick left her flat in Sandymount for a trip to Glencullen and was last seen drinking with a man in Johnnie Fox's pub in the Dublin Mountains.

A preliminary examination was carried out by the Deputy State Pathologist this morning.

There are indications the skeletal remains are those of a male and may have been at the scene for less than a year.


The remains have been removed to Tallaght Hospital.

Some clothing discovered at the scene has yet to be forensically examined.

A forensic anthropologist has also been called in to help with the investigation.

The skeletal remains were found by a woman and her son who were out walking near Viewing Point on Military Road in Rathfarnham at around 2.30pm.

Dogwood wrote:Do we know if its and adult or a child yet?

the papers are saying it's an adult. One of the tabloid papers the other day had a story from a mum whose son is missing and the police called to her door to say it could possibly be him.

There was an article in the evening herald one of the days last week with a message from the IRA. Here's the story. I'd be curious to see if it's this mans body that has been found.


By Conor Feehan
Friday January 29 2010
A GROUP claiming to be the Real IRA has threatened to kill members of a Dublin drug gang unless a disappeared man's body is returned to his family.

The chilling threat was made in a call to the Herald by an individual, using a code word, who warned that unnamed individuals would be killed unless the remains of missing Paul Byrne (20) are returned to his family.

Mr Byrne, from Tallaght, is officially listed as missing since last July but his family believe that he was murdered and his body dumped. His partner is expecting to give birth to his child shortly.

The Herald was contacted yesterday by a caller who threatened "swift and resolute action" against the alleged killers of the missing Tallaght youth unless his body is produced.

The call follows a statement 48 hours earlier by a group, also claiming to represent the Real IRA, who said it was responsible for the murder of Gerard 'Topper' Staunton in Cork last Wednesday.

Garda Commissioner Fachtna Murphy said that the force was taking that statement "seriously".

The call to the Herald is likely to launch a parallel investigation in the capital.

The statement on Paul Byrne's disappearance, stated: "We call for the immediate return of the body of Paul Byrne who was senselessly murdered by criminal elements."

Ireland
Murder investigation after body found
Tuesday, 2 February 2010 12:58
The remains found in the Dublin Mountains over the weekend have been officially identified as those of Kenneth Fetherston.

The 26-year-old father of one from Tallaght in Dublin was last seen at work on 22 September 2009.

He had been driving a red Honda Civic car registration 93 D 44862. The car was found near Gorey, Co Wexford, four days after he disappeared.

Last Sunday his body was found near an area known as Viewing Point on Military Road in Rathfarnham by a member of the public.

A murder investigation has been launched and gardaí are appealing for anyone with information to come forward.

Me too, Amber. There is so much wickedness in the world, so little respect for human life amongst some sectors of our society. Now that Kenneth's family can lay him to rest, RIP Kenneth.

Me too, Amber. There is so much wickedness in the world, so little respect for human life amongst some sectors of our society. Now that Kenneth's family can lay him to rest, RIP Kenneth.

I was thinking more of his wife or mother of his baby and his child and how they'll be affected by it....

He's my daughters age and she has a baby....this just made me think how lucky some of us are Anna. 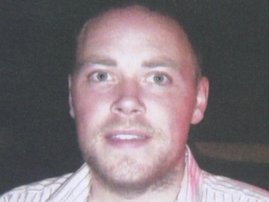