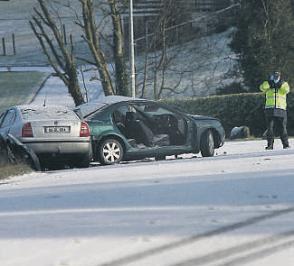 The scene of the crash where Sean and John Gallagher, above right, were killed

A TEENAGE girl learned of her father's death in a road traffic accident when her call to his mobile phone was answered by an emergency worker at the accident scene.

Distraught 14-year-old Eilish Gallagher was told that her father, John, was dead and that efforts were being made to save her brother Sean's life.

The junior certificate student from Ramelton, County Donegal had called her dad to ask him to collect some groceries on his way home from dropping her brother's girlfriend at Derry City Airport.

Instead, the phone was answered by a stranger who told the teen he had been killed.

John Gallagher (55) and his son Sean (24) died in a two-car smash on the main Letterkenny to Derry road at 10.15am on Saturday morning.

As a result of the phone call made by youngest daughter Eilish, the family rushed to Letterkenny General Hospital, arriving before the ambulances carrying the casualties. "It was just a nightmare. No one knew what was going on and they were still hoping against hope that it wasn't true," said the source.

But tragically, both men were pronounced dead at the scene.

A garda source said he had no information about the mobile phone being answered.

"The protocol is that the local sergeant is informed and they go to the family home in question. To my knowledge this is what happened in this case," he said.

The bodies were returned to their home in Ramelton last night following post mortem examinations.

Hundreds of mourners from Ramelton and Arranmore Island where John came from, lined the streets of the town in silence for the sombre arrival of two hearses to the immaculately kept terraced family home.

The crash was on the Slab Road junction at Burt, on a dangerous stretch of the N13 Letterkenny to Derry road.

Driving conditions at the time were treacherous and there had been an earlier snowfall.

The 59-year old-female driver of the other car was removed to Letterkenny General Hospital where she is being treated for non life-threatening injuries.

The dead men are being mourned by John's grief-stricken wife, Hillary, daughters Aisling (22), Aoife (18) and Eilish and a wide circle of relatives in Ramelton and on Arranmore.

OMG this is not the correct way to inform someone of a family death!! Surely the person who answered the phone should've just said that there had been accident and that she was to get to the hospital!!!

Poor girl, that will never leave her mind now :-(

Its heartbreaking that she had to find out this way. Poor kid is traumatised for life