I have been in Portugal since last Saturday, April 28th 2007, at the Ocean Club tourist resort, with my partner (Russell O'Brien), my two children and three couples of friends (Gerald McCann, Kate Healy, Matthew Oldfield, Rachael Mamphilly, David and Fiona Payne as well as Fiona Payne's mother, Diane Webster). We are with our children, **** O'Brien, aged 3 years and **** O'Brien, aged one year.

The other couples have also come with their children, ***** Oldfield, aged one year (daughter of Matthew Oldfield and Rachael Manpilly), **** Payne, aged two years and ******* Payne, aged eleven months (children of David and Fiona Payne). The twins, Sean and Amelie McCann, aged two years and Madeleine Beth McCann who will celebrate her birthday during the holiday week. (Children of Gerald McCann and Kate Healy)

The interviewee and her partner are on holiday with the other couples, having organised the trip from England, where they are friends. They traveled with the, Mark Warner, agency. All the couples have individual apartments in the same complex, with their respective children.

Since Saturday, the habit has been to get up around 7.30/8am, then to have breakfast in a restaurant near the apartment, called the, Millennium, towards 9am, to drive the children to the, Kids Club according to the ages of the children. Only Gerry and Kate have breakfast in their apartment due to the fact that they have three children and it is complicated walking with the three at the same time. Then, they too drive their children to theKids Club
The Kid's Club

**** O'Brien and Madeleine McCann are left in a place at the reception. (4) Responsible for them is an English lady named Cat Baker. Apart from her, there are three or four people to look after the children. (She no longer remembers the names apart from one: Emma Wilding). They do several activities like going to the indoor swimming pool in the complex, going to the tennis court which is outside near the, Tapas restaurant (3), going to the beach (outside), painting and going for walks in the complex.

***** Oldfield, ****O'Brien, **** Payne, Amelie and Sean McCann are left at a third place (2) near the, Tapas restaurant. The supervisor for ***** and **** was an English citizen named Leanne Wagstaff. As for ****, Amelie and Sean, the supervisor would be, but not certain, Stacey Portz. The activities were identical to the other places, outside and inside the complex.

Towards 12.30, they go to fetch their children from the respective rooms at the, Kids Club which close for lunch. Lunch was sometimes taken all together in the apartment of one of the couples.

Towards 2.30, the Kids Club rooms open and only Madeleine, Amelie, Sean and **** go back. The others stay with their respective parents.

Until yesterday, May 3rd, the interviewee has not, to her knowledge, noticed anything strange of suspicious concerning the group of friends or the children. Yesterday, the interviewee wasn't at breakfast because she had a tennis lesson scheduled for 9am. It was her partner who went with their children after breakfast to fetch **** ****** and drove them all to the Kids Club
**** must have been unwell because she didn't go to the Kids Club that day. Kate Healy and Diane Webster came and waited 30 minutes for the tennis lesson to finish at 9.30am. She did not know where the McCann children had breakfast but they were at the Kids Club where she supposed that Gerry, their father, had dropped them off. During the tennis lesson (8), Kate Healy behaved normally.

After the lesson, the interviewee and her partner, O'Brien, went with their daughter **** to the beach. (7) They stayed there until 12.20. Then they had been to fetch **** from the Kids Club The interviewee does not know what Kate did after leaving the tennis court (8) at around 10am, but she knows that Gerald McCann had a tennis lesson (8) between 10.10 and 11.10.

The interviewee did not notice if Madeleine was still at the Kids Club when they had been to fetch ****. They went to have lunch in their apartment with their two children together with Matthew Oldfield, Rachael Mamphilly and their daughter *****. They had lunch from 12.45 to 1.45 then, at around 2pm, the interviewee again played tennis (8) but with Rachael Manpilly this time. The interviewee remembers that while she was playing tennis, (8) she saw Kate Healy and Gerald mcCann with their three children in the play area next to the court. Kate waved to her. The mcCann family stayed in that play area until 2.40 when they drove their children to the Kids Club
After finishing playing tennis (8) at around 2.45, the interviewee went back to her apartment (1) where she stayed with her daughter ****. Her husband and Matthew Oldfield went sailing.

At 3.45, the interviewee went to the Praia beach (7) with her daughter, ****, Rachael Manpilly, Diane Webster, Fiona Payne, *** Payne and ***** Payne. Her husband Russell O'Brien was back from his boat trip and he went to fetch **** from the Kids Club They joined the group at the beach (7)until they went back at around 6.10/6.15. On the way to the beach, the group of friends mentioned above, saw Gerald McCann and Kate Healy having an individual tennis lesson. The children were not with them. At around 5.15pm, they saw Kate Healy jogging along the beach. (7)

Russell O'Brien, Matthew Oldfield and David Payne left the beach (7) a little earlier to go to the tennis court for men's tennis night. When the group came back from the beach (7) at around 6.20pm, they went past the tennis court and they saw all the men, including Gerald McCann, on the court. (8) They stayed to talk to them for around 20 to 30 minutes. Gerald McCann behaved normally. The interviewee supposed that Kate was at the apartment (1) putting the children to bed. Around 7pm, they went to their own apartments (1) with the children. The interviewee bathed her two daughters, read them a story to send them to sleep. As **** was unwell and had difficulty going to sleep, she stayed with her father who, meantime, had returned. The interviewee went to dinner at the, Tapas restaurant at around 8.30pm.

When she arrived at the restaurant, several adult members of the group were already there, without children, who were, in theory, asleep.

Around 9pm, her husband arrived at the restaurant. He had succeeded in getting **** to sleep. Because of the late arrival of David Payne, Fiona Payne and Diane Webster, the meal booked for 8.30pm, did not start until 9pm, when the Payne family arrived. Usually, every 15 minutes one person from each apartment went to the respective rooms (1) to make sure everything was OK. During dinner, everything went well. Everybody was in a good mood.

However, she spotted a man who was going along at a fair speed with a child in his arms with the child in pyjamas without a blanket, which attracted her attention. The interviewee only saw the man from the side with the child in his arms. She noticed this person exactly at the moment when she walked past Gerald and Jez. That person was coming out of the path at the end of the apartment block (1) where they are staying. The man quickly crossed the intersection. The entrance to the building where the apartments are is the exact place where she saw the man. After checking on her children, the interviewee went back to the tapas.&quot; On her way back, Gerald McCann was no longer in the road where she had seen him talking. On her arrival at the restaurant (3) Gerald McCann was with his wife Kate Healy.

15 to 20 minutes later, Matthew Oldfield and her husband, Russell O'Brien, left to go and see the children. As their daughter **** wasn't well, and she was crying, Russell stayed in the room. Matthew checked the children then those of Gerald and Kate. According to him, he saw the twins but he did not succeed in seeing Madeleine. But as he did not hear any noise, he thought everything was OK and went back to the restaurant. Matthew informed the interviewee that Russell was staying in the room. (1) After quickly eating the main course, the worried interviewee went to take her husband's place in the apartment (1) so that the latter could eat.

While she was in the room, around 10/10.15, she heard Kate Healy and Fiona Payne shouting that Madeleine had disappeared. She did not know whether it was Kate who discovered the disappearance because she wasn't at the restaurant (3) at that moment. Every evening was like this, it was normal. In turn they left the table and went to check on the children. Madeleine Beth McCann was a sensible child, very loving, very active and fun. She liked to play. She was intelligent and the interviewee does not believe that if a stranger approached her that she would not shout. During their conversation she did not recall Kate having reported that Madeleine slept badly or that she caused any problems.

Description of the tourist complex.

The Ocean Club tourist complex comprises a wide area, of which the plan is attached. In this plan the most important places for the research are marked numerically, such as:

Jane Tanner's description of the individual:

Brown male between 35 and 40, slim, around 1.70m. Very dark hair, thick, long at the neck. (Noticed when the person was seen from the back). He was wearing golden beige cloth trousers (linen type) with a Duffel type coat (but not very thick). He was wearing black shoes, of a conventional style and was walking quickly. He was carrying a sleeping child in his arms across his chest. By his manner, the man gave her the impression that he wasn't a tourist.

(**) Concerning the child, who seemed to be asleep, she only saw the legs. The child seemed to be bigger than a baby. It had no shoes on, was dressed in cotton light-coloured pyjamas (perhaps pink or white) It is uncertain, but the interviewee has the feeling that she saw a design on the pyjamas like flowers, but is not certain about it.

Concerning these details, the interviewee states not having known what Madeleine was wearing when she disappeared. She has not spoken to anyone about this. Concerning the man, she has only mentioned it to Gerald, but without going into details and with the police. The interviewee has been invited to draw a sketch which we attach to this document. Questioned, she stated probably being able to identify the person that she saw if she saw him in profile and at the place where she saw him.

After reading, goes on and signs. 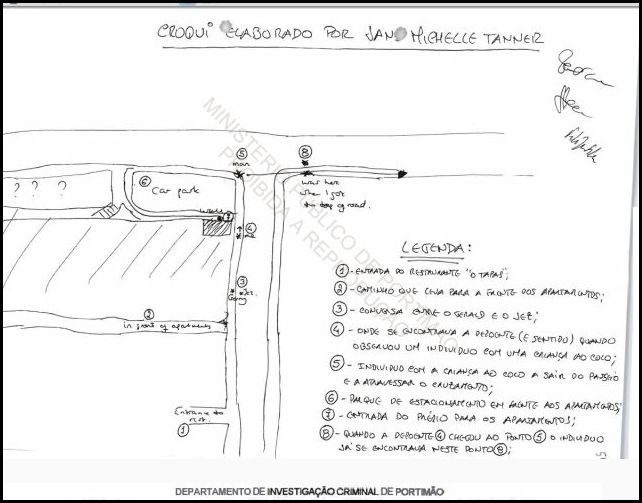