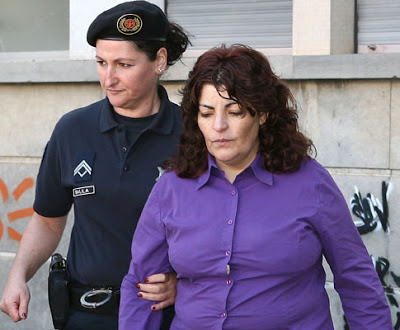 After serving over one fourth of her
sentence, Joana’s mother may leave prison before Christmas, but the
family doesn’t want her home.

The family of Joana Cipriano’s stepfather does not accept to receive
the mother’s child in their home, which is located in the village of
Mexilhoeira Grande, in the county of Portimão. Leonor Cipriano has
requested the Sentence Execution Court of Évora to grant her a
jurisdictional leave license, as she has served over one fourth of the
16 year sentence that she was condemned to, over the crimes of
qualified murder and concealment of her daughter’s body (which has not
appeared yet), on the 12th of September of 2004.

The refusal to accept Leonor Cipriano – who will learn the judge’s
reply to the request that was now filed, after a technical report,
namely by the Prison of Odemira, where she is located -, is related to
a letter that was sent about two months ago to Lurdes David, the mother
of Leandro Silva, Joana’s stepfather, in which she accuses her
ex-partner’s family of intending to “take my children away from me”.
Ruben, aged 8, and Sara, aged 6, live with their paternal grandmother,
an aunt and other relatives.

Joana’s mother’s revolt appears following a letter that was sent to her
by Lurdes David, in which she asked her for permission to remove the
name “Cipriano” from the children’s identification, leaving only
“Domingos”, Leonor’s surname. According to Sara David, the children’s
aunt, this would be due to “whenever my niece and nephew go somewhere
and are called Cipriano, everyone stares at them, remembering Joana’s
mother and the story of her daughter’s disappearance. That was what
happened when the children went to the Registry to get their ID cards”.

If Leonor Cipriano obtains a licence to leave prison, which during an
initial phase will only be for a maximum of seven consecutive days
every four months, under article 79, number 4, of the Sentence
Execution Code, her life does not look easy.

“We are not her family. We are simply Leandro’s family. We won’t take
her back for one single day, and we won’t allow her to see her
children, who are under our care. She is ungrateful. Her lawyer, who
didn’t even bother to contact us concerning that issue of her possibly
leaving prison, he can find her a home, or she can go to her own
family, who never cared about her, either. We are not going to suffer
again what we suffered when Joana disappeared and many people stopped
speaking to us and my sister lost her job and her boyfriend”, Sara
David told DN in a revolted tone.

Leandro Silva, who continues to work at the family’s junk site, asserts
that he still “loves” Leonor, although now he lives with another woman,
in Portimão.

On the other hand, lawyer Marcos Aragão Correia, the legal
representative of Leonor Cipriano and Leandro Silva (in a process
against former PJ coordinator Gonçalo Amaral, over suspected
aggression), has advised the family to be “sensible”, recalling
precisely that he is also that man’s lawyer without charging any
honoraries. “I showed my solidarity towards Leandro when he couldn’t
afford the processes’ expenses and walked around without any documents
to request judicial support from the State”, Marcos Aragão Correia
observed.

This "monster" had alot more children and abandoned them all even before she killed little Joana......

She makes me puke!

Susan wrote:This "monster" had alot more children and abandoned them all even before she killed little Joana......

She makes me puke!

I remember when this kicked off, she hadn't even bothered to report the missing child to the police, it was only when a neighbour kept asking where Joana was, her mum reported it, she cried crocodile tears, and it was obvious then she was involved in her disappearance.