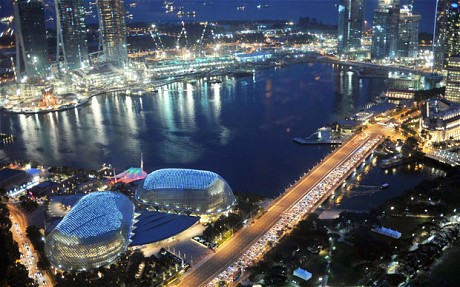 
Just look at the lovely destination - all paid for by you and me!

The council used its cards to fund travel to Goa, India, Bangkok, Thailand and Kyoto, Japan and spent £81,000 on hospitality and restaurant meals Photo: REX FEATURES
By Heidi Blake, and Conrad Quilty-Harper 9:31PM BST 27 May 2011
523 Comments
Despite being ordered to cut spending by almost 30 per cent, town hall chiefs have continued to lavish hundreds of thousands of pounds on dinners at Michelin-starred restaurants, leisure trips and expensive gifts including iPads and video games while slashing jobs and scrapping front-line services.
An investigation by The Daily Telegraph has uncovered details of apparently questionable spending decisions by councillors and local government officials, with more than £2 million spent on travel over the last three years, including flights to Thailand, Kenya and Bermuda.
Documents obtained by this newspaper show that the councils also spent £2m on hotel bills, including stays at the famous Four Seasons in New York, the five-star Pan Pacific in Singapore, and the Athens Hilton.
Hospitality bills totalling £2.6m were paid on the cards, including dinners at Claridges, one of Britain’s most expensive hotels, hog roasts and champagne receptions, as well as tens of thousands of pounds spent booking tables at award ceremonies.
A total of another £500,000 was spent on gifts such as Tiffany jewellery, Gucci products and pure silk ties, while online shopping sprees racked up bills of more than £300,000 at Argos and £150,000 at Amazon.
RELATED ARTICLES
Council credit card spending database 27 May 2011
Council credit cards: plasma TVs and jewels on £1.5m bill 27 May 2011
Council credit cards: home cinema gear, theatre trips and silk ties 28 May 2011
Councils spend £4m on luxury taxpayer-funded trips 27 May 2011
Council credit cards: £2.6m spent on staff parties and visitors 28 May 2011
Council credit cards: £700k for theme parks and leisure activities 28 May 2011
One council even bought llamas on its credit card.
This newspaper has obtained details of credit card spending at 186 councils across Britain using Freedom of Information laws.
Over the past three years, documents show these councils have spent more than £40 million using the taxpayer-funded cards, which suggests total council spending of about £100 million at all local authorities.
All of the councils only agreed to release information disclosing expenditure over £500 – potentially meaning there are tens of millions of pounds in additional spending on lower value items or services.
Last night, Whitehall officials were shocked when shown details of the credit card bills with senior Government sources claiming that another MPs-expenses style scandal may be emerging. It is not clear whether rules or laws have been broken and any public money can be reclaimed.
Eric Pickles, the Communities Secretary, charged with overseeing local authorities and cutting waste described the spending as “wild”.
He said: “It appears that for years, some councils have been enjoying the high life paid for by you and me.
“Now that we are forcing councils to release details of their expenditure, the culture of wild overspends and excess which became the norm under Labour, will hopefully become a thing of the past.”
The documents show that Cornwall Council was responsible for the most excessive spending, with a total credit card bill of almost £9 million including £1,145,160 on hotels alone since 2008.
The council used its cards to fund travel to Goa, India, Bangkok, Thailand and Kyoto, Japan and spent £81,000 on hospitality and restaurant meals.
Council staff refused to explain their expenditure further when contacted by The Daily Telegraph earlier last week.
In contrast, 48 councils did not issue the credit cards while several others only incurred bills running into thousands of pounds.
The rules on the cards are not clear with each council thought to have drawn up its own guidelines. Whitehall officials are understood to be increasingly concerned that there was little oversight on the expenditure with few checks made on the use of taxpayers’ money.
The revelations are likely to spark public fury at a time when councils are axing more than 170,000 jobs, closing libraries and cutting spending on care for the elderly. Council tax has more than doubled over the past decade as local authorities have insisted they are cash-strapped.
However, the documents show that officials used the council cards to treat themselves to iPads, Macbooks and iPhones, with more than £100,000 spent on Apple products alone.
Thousands more went on shopping sprees at John Lewis, Debenhams and Marks & Spencer.
The cards were used to fund leisure activities totalling more than £600,000 including theatre trips, paint-balling excursions and visits to theme parks such as Alton Towers and Flamingoland.
Tens of thousands of pounds were spent across several councils on games consoles including Nintendo Wiis and Xboxes as well as video games such as Guitar Hero.
The documents also disclose how the credit cards were used to buy a bizarre array of miscellaneous items including beer mats, leather passport covers, dog food, breast examination kits, snow machines and jacket potato ovens.
Lewisham Council in south London paid £73,000 to Swedish Body Armour, a Scandinavian company that sells protective clothing including bomb-proof trousers and stab vests.
Horsham Council in West Sussex spent £1150 on two llamas to graze on communal land along with a small flock of sheep. They also spent £575 on live fish for a council pond.
Aberdeenshire Council in Scotland spent more than £3,500 on cheerleading pom poms and more than £4,000 on professional hair and beauty products for a “hairdressing classroom” at a local school.
East Lothian Council, near Edinburgh, spent thousands of pounds on mountain biking accessories, which it was unable to explain, and wetsuits as well as a £500 payment for “beekeeping”.
Essex Council spent around £4,000 on “birds for a pet barn”, a chicken run and an “incubator for the new hatchery” at Marsh Farm Country Park in 2010 and 2011.
Despite being ordered by Mr Pickles to publish all spending over £500 by January, 252 of the councils contacted claimed to be unable to disclose their credit card bills when contacted by The Daily Telegraph.
The 186 councils that replied were unable to account for more than £20,000 that had been spent on their cards, where receipts were not provided.

perhaps in these austere times,councillors should be told only to use these credit cards locally eg councillors in cornwall should use them in cornwall

That's a good idea if only they would.

On the local news they blether away making excuses for what they have spent but it seems they have forgotten whose money it is. I think they truly believe its for them to use where-ever and when-ever they like. Don't we all wish we could do the same.

One spokesperson, don't know who it was, said they bought silk ties to sell on. Oh, how nice - so they can make a profit by using our money!

It sounds more like living it up at our expense to me!

perhaps they should set up hundreds of websites to promote their area/employe social media etc to promote their local area etc,even do what i did the other day(actually brought a quarter of a shelf of maps two mondays ago),such spending would boost the local economy and keep people in employement locally,if I did that and there was a row about it,i would defend myself by urging everyone to go and buy the maps to boost the local economy.