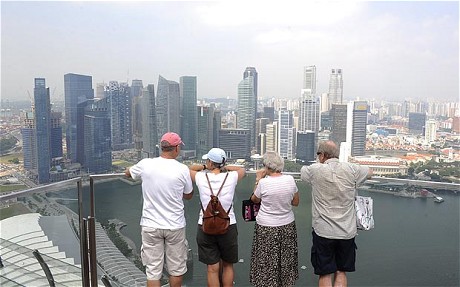 Singapore was one of the destinations visited by councillors and officials Photo: REX


The taxpayer-funded cards have been used to pay for international flights costing almost £1m since 2008, while the bill for hotel stays totals more than £2m.
Councillors and officials have travelled to destinations including China, Japan, Thailand, Singapore, Bermuda, Jamaica, the US and Canada. Much of the travel was first class.
Cornwall Council spent over £5,000 on trips to New York for the “personal training and development” of its staff, while the £37,000 training bill run up by officials from Wrexham included payments to Yale, the prestigious American university.
Staff from Lancashire Council spent £5,090 on conferences in New York, Boston and San Francisco, while officials from Lewisham spent more than £2,000 on an event in Prague, Czech Republic in June 2008.
Councillors and staff have stayed at dozens of the world’s five-star hotels, including the Hilton in Athens, which overlooks the Acropolis; the Hyatt Regency in Guandong, China, and The Dorchester in London. North Yorkshire County Council spent a total of £2,210 on three occasions for “outdoor education centre staff” to visit the Meribel ski resort in the French Alps.
RELATED ARTICLES
Council credit card spending database 27 May 2011
Council credit cards: home cinema gear, theatre trips and silk ties 28 May 2011
Councils spend £4m on luxury taxpayer-funded trips 27 May 2011
Council credit cards: £2.6m spent on staff parties and visitors 28 May 2011
Council credit cards: £700k for theme parks and leisure activities 28 May 2011
Council credit cards: plasma TVs and jewels on £1.5m bill 27 May 2011
The documents obtained by this newspaper also show how town “twinning” schemes are being used by councils across Britain to justify spending hundreds of thousands of pounds of taxpayers’ money on trips to sought-after foreign resorts.
Councillors from Kensington and Chelsea have made three separate trips to Cannes, the borough’s twin town, since 2008.
The town on the Cote d’Azur is home to the celebrity-studded Cannes Film Festival and famous for its array of designer clothes shops, expensive restaurants and luxury hotels.
The purpose of twinning is to build cultural and commercial ties, such as educational and business exchanges, sporting contests and trade links, with foreign towns and cities.
Officers and councillors from Derby spent £2,241.18 on a stay at the Romantik Hotel in their twin town of Osnabrueck, Germany in June 2009 and June 2010.
The hotel claims to offer guests the change to “find romance in the heart of the old town of Osnabrück whilst enjoying an afternoon Vital massage”.
It also boasts a spa complete with a steam bath, a bio sauna, “experience showers” and a solarium.
Mansfield District Council in Nottinghamshire paid £958 for two flights to attend a “sister cities celebration” in Cleveland, Ohio in August 2008, while Newtownabbey in Scotland spent £2,598 on flights to Gilbert Arizona for a similar event in November 2008.

A couple of years ago I was at Gatwick Airport departure Lounge waiting for a Flight to Halkidiki a party of about 8 arrived and found seats, the Lady
sitting next to me trying to talk to the man opposite. I offered to swap seats with him but he said it was O.K. thanks, no bother.
I got chatting to the Woman and it turned out they were all on a 4 day Junket to Halkidiki to attend a conference on EU Funding and she and her
colleagues were from Scotland. Then she said they were making good use of the flight by staying on for another 4 days.

I happened to say my City had benefitted from Objective one funding and she said "Goodness, how do you know about Objective One Funding, cheeky
C**!!!!!!

The sooner Britain gets out of Europe the better , the Accounts for the EU havn"t been audited for years.

You are always on the move so it seems!

It makes me want to pull my hair out - I get so angry. It's almost as though they have forgotten whose money it is. They treat it like their personal "slush fund"!!!!!!!!!