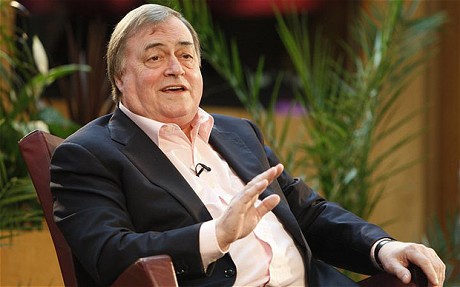 2:24PM BST 29 Oct 20111 Comment
The Labour peer said fraud was the "only explanation" for some examples that had emerged, and called on the Cabinet Secretary to investigate.
The comments came after records suggested that staff in his private office used a card to spend more than £15,000 in bars, restaurants and cafés over two years.
A bill for £456 was run up at an Australian casino in 2004 when the then-Cabinet minister was visiting to review the country's gambling laws.
Speaking to the Hull Daily Mail, Lord Prescott stressed that he had never personally held a government procurement card.
He highlighted payments such as £2,000 on the same day from a camera shop in China and £360 at two golf clubs in Kent.
RELATED ARTICLES
Prescott's public-funded party 27 Oct 2011
"I have got no idea about particular entries," he said.
"You would certainly remember anyone buying £2,000 worth of camera gear but it's news to me.
"The same thing with the golf – I don't even play bloody golf.
"It has been established some cards were cloned and that is the only explanation for some of the things on here."
Lord Prescott questioned a £296 spend on three separate trips to the London Eye.
"I've only been on the thing once in my life and that was then I showing Mayor Daley from Chicago around, so why should there be three different entries?" he said.
"It is possible someone cloned the card and that is what has shown up in some of these entries.
"I have asked the Cabinet Secretary to clarify this immediately."
The peer accused Tory minister Grant Shapps of "dirty tricks" by implying he had been gambling at the casino with the credit card.
"That remark was totally out of order and suggests to me this is all about political dirty tricks," said Lord Prescott.
"We were very careful during that trip not to spend money on gambling with any casino company because of the sensitivities over the issue of super-casino licences we were discussing back in the UK.
"I suspect this is all about trying to smear me and use all this as a smokescreen when the Government was publishing its own departmental credit card spending."
Mr Shapps, however, hit back at Lord Prescott's claims that the card could have been cloned.
He said: "John Prescott is not credible in trying to deny his Australian spending spree at taxpayers' expense.
"It is on the record that he visited the Star City Casino, and opening up the books has revealed an audit trail of spending of public money at the casino, at Doyle's seafood restaurant in Sydney harbour, and at the Sydney aquarium.
"Prescott must come clean on these visits and I want to see a full forensic audit of the receipts and card signatories."
Share:

Telegraph Campaign: Hands Off Our Land

Same here - and if it was cloned - how did that 'someone' get hold of it - security issue here I think!

Luckily it was only fatty Prescotts card that was cloned...the real disaster would have been if someone had cloned him.