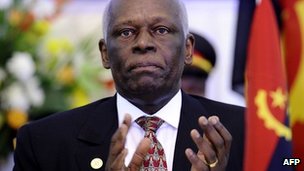 They should be "advantageous for both countries" and "in a spirit of
solidarity and mutual help", he said.

Analysts say Portugal's economy is expected to contract by 2.8% next year and
Angola's to grow by 12%.
'Trump cards'
The IMF has agreed to give Portugal a $107bn bailout on condition that it
introduces a wide range of economic reforms - including privatisation.

Analysts say Angola could buy stakes in some of the privatised companies.

Angola's investments in Portugal have risen sharply in recent years.

Angolan companies own the equivalent of 3.8% of companies listed on
Portugal's stock exchange, from banks to telecoms and energy, it says.
Continue reading the main story
Ex-colonial brothers in business

"We're aware of the difficulties the Portuguese people
have faced recently and in such difficult times we must use our trump cards,"
Angola's state news agency Angop quoted Mr Dos Santos as saying.

He did not elaborate during the joint press conference with the Portuguese
prime minister in the capital, Luanda, what these trump cards were.

"We should take advantage of this moment of financial and economic crisis to
strengthen our bilateral relations in the different sectors of our respective
countries," Mr Passos Coelho is quoted by the AFP news agency as saying.

The family of Mr Dos Santos - who has been in power for 32 years - controls a
large chunk of Angola's economy, while most Angolans live in poverty.

Mr Dos Santos' daughter Isabel is known to have a large Portuguese portfolio,
as does the state oil firm Sonangol, our former correspondent says.

It was Mr Passos Coelho's first visit to Angola since he was elected to
office in June. He grew up in Angola, where his father was a doctor during the
colonial era.

Angola, which is recovering from a long brutal civil war which ended in 2002,
gained independence from Portugal in 1975.