Bones found under the dirt floor of a New Mexico garage could finally solve the case of a mother-of-four who went missing in 1952.
Inez Garcia was last seen leaving a Santa Fe bar in the early hours of November 6 after having an argument with her husband, who later reported her missing.
Detectives decided to revisit the unsolved 62-year-old case earlier this month and, on Tuesday, found two bone fragments that could belong to the 27-year-old woman.
Family and friends of Ms Garcia had always feared the worst, saying she would never have walked out on her four children, aged from eight months to five years at the time.
Rumors circulated for decades that her husband, who has since died, may have been involved.
Police told Fox News that after Ms Garcia disappeared her husband, Juan Andres Jose Garcia, refused to let anyone in the garage.
'Nobody was allowed in here when he was alive ... The kids weren’t allowed in here, nobody was ever allowed in here, so it’s just the mystery of what could be here,' police spokeswoman Celina Westervelt said.
'There were lots of rumors that he buried her in the dirt floor,' she added.

Mr Garcia, who was 40 at the time of his wife's disappearance, was questioned several times by police but never charged.
Two officers have been searching the dirt floor by hand, and brought in a cadaver dog too which is said to have immediately pinpointed areas of interest.
The fragments of bone they found are thought to be human, and could be from a shin bone and forearm.

The bones have been sent to a laboratory that will test whether they are human. DNA samples were also taken from one of Ms Garcia's daughters to see if it will match.
It is not the first time the garage of Ms Garcia's home has been dug up in the search for her.
When the apartment changed hands in 1996, after her husband's death, police were called in after reports that neighborhood dogs were hanging around the garage, according to the Albuquerque Journal.
In that case two large bones were found, but tests showed they were from animals.
Detective Garcia, who is not related to the family, decided to open the cold case after speaking to older colleagues in the police department.
'I thought, "Why not?" Maybe I could bring a little closure,' Detective Garcia told Santa Fe Mexican.
It will take about two months for tests to be completed on the bones. 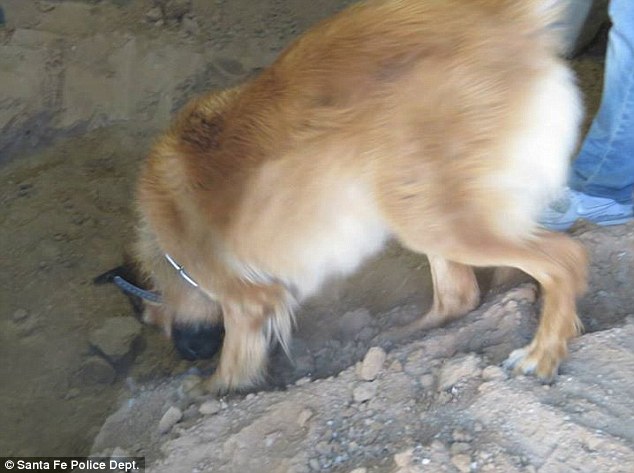 Re: Cadaver dog alerted detectives to areas of interest in case of woman missing for 62 years

The fact that dogs NOT trained to find a cadaver had been hanging around says it all.