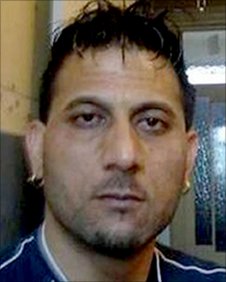 Detectives have named a man they "urgently" want to speak to after a
24-year-old was stabbed to death in a suspected honour killing in
Lancashire.

Naeem Majid Butt, 37, of Blackburn, is wanted by police after the body
of Saheel Ahmed was found in an alleyway in the town on Tuesday.

It is believed Mr Ahmed had been chased by a man wielding a knife.

Officers also believe the attack may have been provoked by an alleged
affair between the victim and a woman.

They are also looking at the theory that the murderer may have lain in
wait before he carried out the revenge attack.

Police say Mr Butt has links to Edinburgh, is likely to have travelled
to the city and may still be there.

Det Supt NeilHunter said: "We need to speak with Naeem Butt as a matter of urgency. I
would urge anybody who knows of his current whereabouts to contact
police immediately.

"We believe he may well have travelled to Edinburgh and I would appeal
to anybody in that area who thinks they may have seen him in the past 72
hours or so to come forward.

"I would also like to speak with anybody who has had any contact with
him whatsoever, either directly or indirectly, since Tuesday. 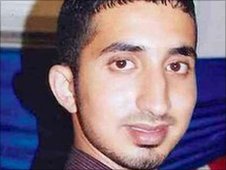 Saheel Ahmed may have been fatally stabbed in an honour killing.

"Finally, I would appeal to Mr Butt directly to make contact with the
police as soon as possible.

"However, I would urge members of the public who may come into contact
with Mr Butt to exercise caution and not to approach him directly but to
contact the police immediately.


"It is crucial that we speak with him sooner rather than later as he
may hold information that is key to this investigation."


He has a piercing in both ears, as well as a number of
tattoos, including a scorpion and peacock on his left arm and a cobra on
his left hand."

This is the latest article of a sighting I could find - so he's still out there somewhere. 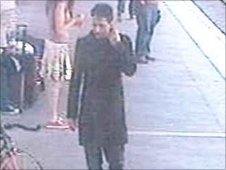 Naeem Butt was filmed arriving at Edinburgh's Haymarket station
A murder suspect on the run from Lancashire Police is being harboured by associates in Edinburgh, detectives believe.
Naeem Majid Butt, 37, of Blackburn left the town for Scotland following the fatal stabbing of a 24-year-old man in an alleyway on 22 June.
Saheel Ahmed, of Blackburn, is believed to have been the victim of an honour killing.
The married man was killed near Warrington Street, in Little Harwood.
Detectives investigating his murder have released CCTV stills of Mr Butt that were captured as he took a train from Manchester Piccadilly to Edinburgh Haymarket on the day of the murder.