Stephen has been missing since Wednesday 20 September 2006. Originally from Devon, Stephen was staying with friends in the Chuckery area of Walsall when he disappeared. He was last seen at about one o’clock that afternoon; a few hours later he sent his mother a text message. Stephen has not been heard from since.

There is great concern for Stephen as he had been feeling down prior to his disappearance. His family and friends are extremely worried for Stephen’s safety and urge him to get in touch and let them know that he is OK. He can call the confidential service Message Home on 0808 800 70 70.

Stephen is 5ft 10in, slim with cropped brown hair. When last seen he was wearing a black hooded zip top, dark jeans and white trainers. 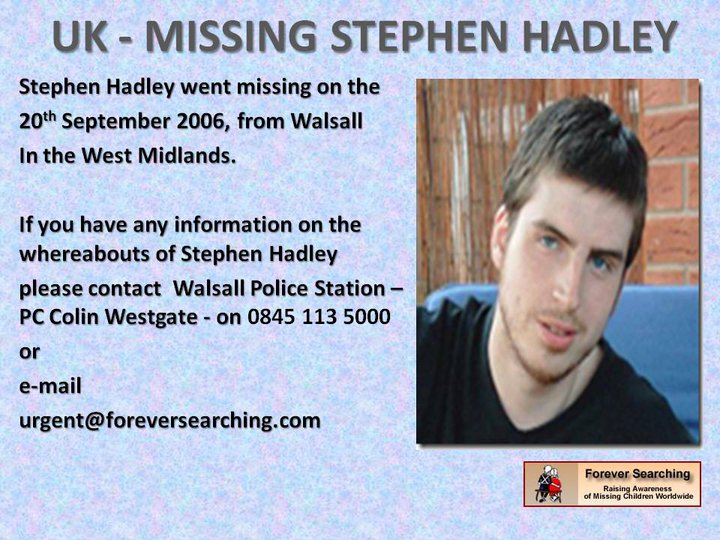 Police turn to Facebook in hunt for missing Stephen


WALSALL Police are using Facebook for the first time in an appeal to trace a missing person.

Officers are hoping to find the whereabouts of Stephen Hadley, aged 28, who went missing from Walsall on Wednesday, September 20, 2006, and are turning to the popular social media forum in an attempt to gain new leads.

Despite numerous appeals and searches, Mr Hadley has not been seen since the date of his disappearance, but police hope that an appeal on the force's Facebook site might generate information to help them discover his whereabouts.

"We have investigated Stephen's disappearance over the years and have issued regular media appeals, including a feature on the BBC1 Missing programme," said DS Greg Evans from Walsall police.

"Despite the appeals and investigation we haven't had any confirmed sightings of him. Facebook is a popular site for people to stay in touch and it might be that Stephen or someone who knows where he is will pick up the message and contact us or his family."

Mr Hadley was living in Devon at the time of his disappearance, but came up to Chuckery, Walsall to visit friends. He vanished on the Wednesday and the only contact since has been a text message to his mother. He then turned off his phone.

Police made a precautionary search of a canal at Aldridge following reports that he may have been seen on a towpath there. Extensive local searches, a poster campaign and letter drops to houses in the area have also failed to produce results.

The appeal has been placed on the force Facebook site www.facebook.com/westmidlandspolice.