"Spirit told me she's gone, says Acorah". This article is in Tuesday's Sun. Of course the parents are disgusted and the usual "they have been unable to get Portugese police to reopen their failed investigation".

I was particularly interested that the Sun has included they "are still raising cash to support their continuing hunt for Madeleine".

Yes I have just picked up this article in The Sun - reading it makes one wonder what AD is doing following these psychics for leads. Interesting picture of Kate and Gerry - they look as though they are about to start laughing ( odd ). Can't bring photo over here on iPad - perhaps someone else will do it.

Believe in him or not Acorah has a massive following so not good news for the "she is findable" so give us a quid campaign. I see the Sun is also spinning Redwood's comments:

Detectives are following more than 100 leads — many of which suggest Madeleine is still alive.

When did Redwood say that?

Being discussed on sky news now....funny how psychics are rubbish when it has 'maddie is dead' but redwood is taking into comsideration these same psychics.


Like the dogs......they have a 200% record but then comes along the Madeleine story and all off a sudden.....there rubbish and wrong .

kitti wrote:Being discussed on sky news now....funny how psychics are rubbish when it has 'maddie is dead' but redwood is taking into comsideration these same psychics.


Like the dogs......they have a 200% record but then comes along the Madeleine story and all off a sudden.....there rubbish and wrong .

A spokesman for the McCanns said: “Kate and Gerry believe their daughter is alive and the Metropolitan Police are currently pursuing an investigation to that effect.

“If anyone credible has any credible evidence that she is alive they should come forward.”

So there we have it. People should ony come forward if they have evidence she is alive.

The TV medium, who claims a messenger from the spirit world gave him the information, said: “She’s not on this earth any more.”

A source close to the McCanns said: “They are sickened by this.”

Acorah, 62, has added to Kate and Gerry’s anguish by claiming Madeleine died years ago — and will soon be reincarnated.

He said: “I know her parents are convinced Maddie is alive and I’m really sorry - but the little one has been over in the spirit world for some time.

“I don’t think she’ll be there long before she reincarnates.

“When children pass over who haven’t had full lives I believe they choose the time to come back in the same form again — as another little girl.”

The McCanns are said to be disgusted by Acorah’s claims. A source said: “Kate and Gerry are sickened. This character Derek Acorah is nothing but a self-publicist.

Millionaire medium Acorah, ex-host of TV’s Most Haunted, claimed a messenger from the spirit world named Sam told him Madeleine was dead — shortly after she vanished in Praia da Luz, Portugal, five years ago.

He said: “I got asked to go over there at the very beginning and I said to my wife that I was going to go. But then she showed me some emails from a number of psychics who were already there.

“There were four of them and they were coming to a blank.”

Acorah claimed he sought guidance by contacting Sam — his spirit “guide”. He said: “I sat in my meditation room and I asked the spirit world and Sam confirmed she was dead. It is horrible but he said there was no purpose for me to go there.

“He said the reason the others cannot get a link is because the little one had already come over. She’s not on this earth any more.

Acorah said he decided not to go to Portugal to spare the McCanns unnecessary suffering.

He added: “I wasn’t going to bring extra misery to them. I do know that they will find out what happened to Maddie one day.” Acorah made his claims days after the McCanns marked the fifth anniversary of three-year-old Madeleine’s disappearance from the holiday resort. He was speaking while promoting his latest tour.

Detectives are following more than 100 leads — many of which suggest Madeleine is still alive.

A spokesman for the McCanns said: “Kate and Gerry believe their daughter is alive and the Metropolitan Police are currently pursuing an investigation to that effect. (Not 100% true Pinky)

“If anyone credible has any credible evidence that she is alive they should come forward.”

Acorah last night said he was surprised that his comments had upset the McCanns.

He added: “I was only making those statements to explain why I didn’t go to Portugal.

“I would hate to offend or upset the McCanns as a parent myself.”

Acorah caused offence in 2009 by claiming Michael Jackson’s ghost contacted him at a seance.

And in 2005 George Best’s friends accused him of cashing in after he claimed he would speak with the dead football legend.

Kate, 44, and Gerry, 43, are still raising cash to support their continuing hunt for Madeleine.

They believe Madeleine may still be alive — but have been unable to get Portuguese police to reopen their failed investigation.

DEREK Acorah claims he had his first supernatural experience as a child when he was visited by his dead grandad.

Acorah set himself up as a medium after failing to make the grade as a Liverpool footballer.

He got his break in 2001 on TV’s Most Haunted and became one of the UK’s best known psychics.

But in 2005 he was allegedly outed as a fraud by Most Haunted’s psychologist Dr Ciaran O’Keeffe.

While shooting at a haunted prison in Cornwall, O’Keeffe secretly invented a long-dead jailer called Kreed Kafer — and talked about him while Acorah was in earshot.

Acorah was later filmed becoming “possessed” by the fictional character.

O’Keeffe then revealed the name Kreed Kafer was an anagram of “Derek Faker.” Acorah was later sacked from the show.

Dear God! Have you read the comments!

wjk wrote:Dear God! Have you read the comments!

It might be interesting to go back and look for these individuals commenting on a fake story about fake German number plates.

I think The Scum are just trying to bury bad news with RB being charged. I hope if it's not true Derek sues.

I was also thinking the same Margaret. Covering up today's news on Brooks and maybe this story has been put out there to try and counteract some of the growing questions that were around in the last couple of weeks. Comments weren't good but you can be assured with a story like this that people will shoot a psychic down.

I totally refute the article that had appeared in a newspaper today. I am not so sad that I have to cash in on somebody else's misery!

So, we had the picture of Madeleine associated with Low Cost Holidays' Ads, now this faking of a sensitive piece by a household name..

There are some truly sick folk out there.

from the early days someone posted on the 3as i think --- watch out for whats burried - example everytime the mcanns are in the sun --- theres some kind of bad news going on about them elsewhere -- news to bury something far worse . tut tut

I totally refute the article that had appeared in a newspaper today. I am not so sad that I have to cash in on somebody else's misery!

I've just tweeted back that he must get the Sun to publish his denial.

They've got a whole programme mapped out for the foreseeable future? Every few days or so, another spurious bit of Maddie news. Disgusting.

Definitely the sudden emergence of the 'kate feels guilty' headlines was a Team McCann attempt to divert attention from Brooks' Leveson confession that she threatened "persuaded" Cameron/May into opening the SY Review.

I'll bet the infamous pair are regretting this Review now, things are just so unstable everywhere, and nothing can be assured anymore. They will be forced to hustle like mad for the foreseeable future. Ah well, that's what happens when a pair of narcissists get way too big for their britches. 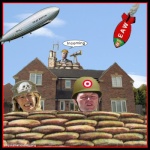 As part of the continuing Madeleine McCann coverage, today's article in Anorak states, "We told you this story would run and run. We just never thought our grandchildren would be reading about it."

Kate, 44, and Gerry, 43, are still raising cash to support their continuing hunt for Madeleine"

That's got as much credibility as all these'Psychics . They might still be raising cash but it is not being used in the search for Madeleine!!!

“I have been stitched up by a paper run by Rupert Murdoch.”

“I have been stitched up by a paper run by Rupert Murdoch.”

So the Echo echoes the Mail story except Mr Ancorah doesn't mention going to Portugal.

Derek Acorah, whether a charlatan or deluded, should be ashamed over his cruel Madeleine McCann nonsense